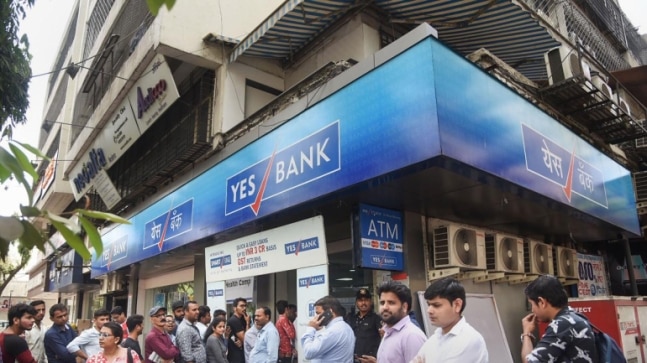 File photo of customers outside a Yes Bank branch at the time RBI imposed a moratorium (Photo Credits: PTI)

The Central Bureau of Investigation (CBI) is likely to file the chargesheet in a case registered against Yes Bank founder Rana Kapoor among others on Thursday. During the initial probe, the CBI has hinted at the involvement of Kapoor’s family members, the companies owned by them and DHFL (Dewan Housing Finance Ltd) promoter and non-executive directors Kapil and Dheeraj Wadhawan in the Yes Bank scam.

A case was first registered on March 7 by the apex investigation agency in connection with suspicious loans granted by Yes Bank and the alleged quid pro quo between the bank’s founder Rana Kapoor and DHFL’s Kapil and Dheeraj Wadhawan.

Transactions under the CBI’s scanner include an investment of Rs 3,700 crores in DHFL’s short debentures while the financing firm granted loans of Rs 600 crores to DOiT Urban Ventures Ltd (DUVPL), a company owned by Kapoor’s daughters. The 600 crores loan by DHFL to DUVPL is suspected to be a kickback for Kapoor in exchange for the Rs 3,700 crores debenture investment made by Yes Bank.

The loan to DUVPL was granted with mortgaged properties as collateral. The value of these properties comes out to be around Rs 40 crores but was inflated to Rs 750 crores. Another suspicious loan of Rs 750 crore from Yes Bank to a company controlled by Kapil and Dheeraj Wadhawan is under the CBI’s radar.

They were remanded to CBI custody and sent to judicial custody in the second week of May.

Rana Kapoor and the Wadhawan brothers are presently lodged at the Taloja prison. Meanwhile, Kapoor has moved the special CBI court seeking anticipatory bail and the hearing for the same is scheduled on Thursday in Mumbai.