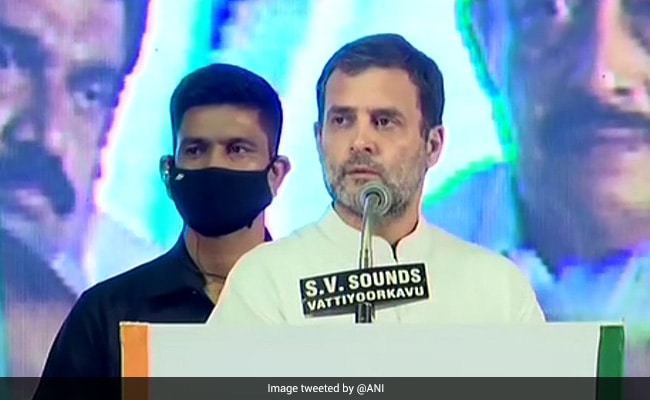 Rahul Gandhi claimed jobs in the state were only available for the CPI(M) workers.

Congress leader Rahul Gandhi, who was in Kerala ahead of the assembly polls in the state, visited a group of Public Service Commission rank holders protesting outside the state secretariat, in an unexpected change of schedule.

Mr Gandhi, during a rally in Thiruvananthapuram, hit out at the Left government in Kerala and claimed jobs in the state were only available for the CPI(M) workers.

“I want to tell you about what’s happening in the country and the state. I want to speak not only to the Congress workers, but to all. To students who are educated but are protesting in front of the legislature and wondering why they are not able to get jobs. I want to speak to fishermen that why as they leave for the sea, they read in newspapers that the government is working to destroy their livelihood”, he said.

Later he visited the protesting rank holders and said, “Youngsters in Kerala are wondering why they can’t get jobs. It is dynamic state with brilliant youngsters. Left front government said they will make Kerala perfect. My question is – perfect for whom? Perfect for people of Kerala or for its own party? If they are one of them, carry their flag, every job is for them.”

The Congress-led Opposition front has also been protesting in support of the rank holders outside the state secretariat.

The state government has claimed that the selection for the rank lists has been fivefold by the Public Service Commission against the vacancies and not all can be given jobs. The protests continue outside the secretariat.

“I fight the BJP, policies of the RSS every day. I take any step, the BJP attacks me. Right now, they are watching this speech and thinking what is that we can say to attack him. One thing I don’t understand is, why are they going soft on cases against the Left government, with even a person in Chief Minister’s Office involved.”, Rahul Gandhi said, making references to the links to gold smuggling case, involving diplomatic channels.

M Sivasankar, a suspended former principal secretary to Kerala Chief Minister, was arrested for alleged links to the accused in the gold smuggling case. He is now out on bail after almost 100 days in jail, with prosecution either not able to submit evidence against him or failing to have submitted the chargesheet within 60 days. Pinarayi Vijayan had alleged a witch hunt by central probe agencies in Kerala to please their political bosses.

Rahul Gandhi also hit out at the BJP in reference to the central farm laws, and farmers being called “terrorists”.

Meanwhile, opposition leader Ramesh Chennithala has launched an offensive against the Left government over a memorandum of understanding (MoU) that was signed with an American company, alleging they were allowing foreign vessels for deep sea fishing.

The Kerala Chief Minister strongly denied the allegations, saying the state policy did not allow foreign vessels for deep sea fishing. A government order was subsequently released that asked for the MoU between a government body and an American company regarding building of deep-sea trawlers to be cancelled.

“As a fully government-owned company KSINC has proceeded to do this without consulting or even informing the government before signing the MoU with EMCC. The MoU signed between KSINC and EMCC has led to incorrect information being spread that government of Kerala has taken a decision to grant deep sea fishing to trawlers of corporates, whereas no such decision is seen taken”, the government Order stated.