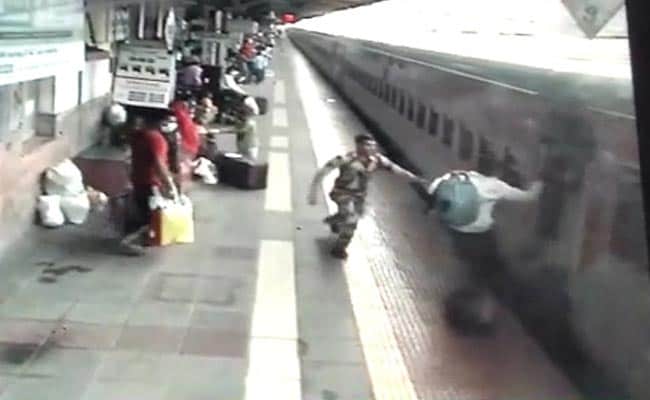 A tragedy was averted this afternoon at Maharashtra’s Kalyan Railway Station when 52-year-old Dilip Bhikan Mandge jumped off a moving train and was saved from being crushed under its wheels by alert security officers. CCTV footage, accessed by NDTV, showed two security officers dragging Mr Mandge to prevent him from slipping onto the tracks as he is dragged on by the moving train.

Dilip Mandge, along with his son, was scheduled to board the UP-bound Kamyani Express from Maharashtra’s Kalyan today. The two were travelling to Burhanpur in Madhya Pradesh.

But, instead, they boarded the Bihar-bound Pawan Express by mistake. By the time the two realised their mistake, the train had already started leaving the platform.

The CCTV footage captured Mr Mandge and his son jumping out of the train along with their luggage. While his son managed to land on the platform safely, Mr Mandge, who held on to the side bar on the train door, seemingly lost control and was dragged on by the train.

The footage also shows one of the security officials animatedly talking to Mr Mandge while pointing at the moving train.

The passenger had received minor injuries and is stable, officials said, adding, that he refused any medical assistance and thanked the Railway Police Force for their timely intervention and help.

Second Part Of Parliament Budget Session To Begin From Monday