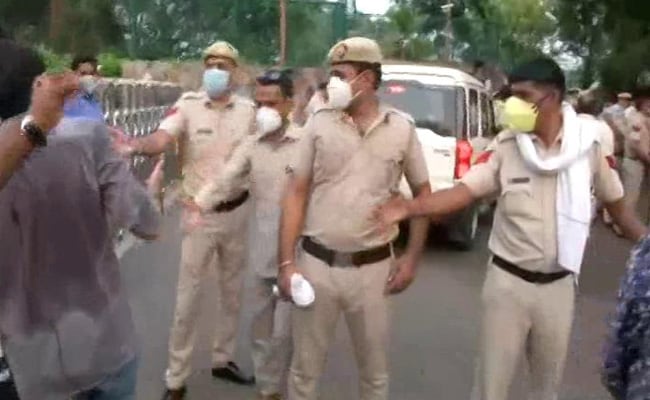 A team of the Rajasthan Police that went to one of the two fancy resorts in Haryana’s Manesar, where 18 Congress legislators have reportedly been camping since the weekend, returned empty-handed on Friday after they were not able to find any rebel MLAs there, sources have said.

The Special Operations Group (SOG) of the Rajasthan Police had gone to record a voice sample of Bhanwar Lal Sharma, who, according to the Congress party, is heard on tape discussing bribes from the BJP as part of a conspiracy to bring down the Rajasthan government headed by Ashok Gehlot. NDTV cannot verify the authenticity of these tapes.

The Rajasthan Police team was stopped briefly before being allowed inside by the Haryana Police, and now claim their counterparts in the BJP-ruled state did not cooperate fully.

The Haryana cops were seen blocking the vehicle of the Rajasthan police outside the Manesar hotel for nearly an hour. The police vehicle was later seen entering the hotel compound and then being driven out after several minutes.

On Friday morning, the Congress announced that it has suspended Bhanwar Lal Sharma and another MLA, Vishwendra Singh, who is also, according to the party, recorded while discussing cash transactions with the BJP. They have denied the allegations and said the taped conversations are not authentic.

Soon, the Haryana Police showed up at the two resorts, about 5 km apart, setting up a showdown with the visiting cops from Rajasthan. The Congress has said that Sachin Pilot, by choosing hotels in Haryana as a holding pen for his team, has sought “the cover of the BJP”, the party which governs Haryana.

Chief Minister Ashok Gehlot has accused Mr Pilot of being directly involved in the alleged horse-trading.

Mr Pilot has been in Delhi with around 20 rebel MLAs since the weekend. His running feud with Ashok Gehlot escalated after he was asked to answer questions on the alleged conspiracy to bring down the government in which he was number two. As he refused to return to Jaipur and skipped meetings called by the Chief Minister, he was removed as Deputy Chief Minister and Rajasthan Congress chief. But in Delhi, the Congress leadership continues its efforts to bring him around.

Sources close to Sachin Pilot have told NDTV that he cannot take Congress offers of rapprochement, being conveyed through Priyaka Gandhi Vadra and others, as authentic, given that the party has taken harsh action against him.

Mr Pilot, after being sacked as Deputy Chief Minister and president of the Congress unit in Rajasthan, has gone to court to challenge the move to disqualify him and 18 others from the Rajasthan assembly. The Congress says they acted against the party by defying instructions to appear at two meetings this week that were chaired by Mr Gehlot.