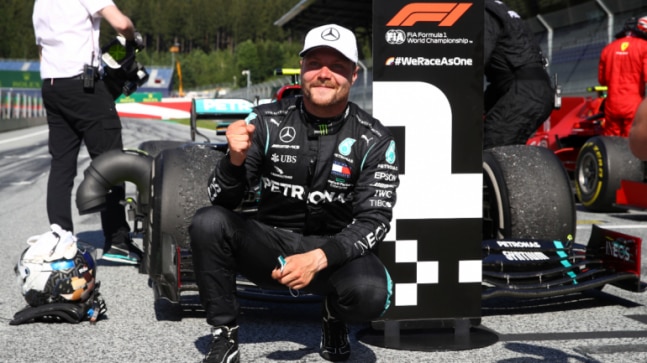 The race was interrupted three times by a safety car and nine of 20 drivers abandoned, including both Red Bulls of Max Verstappen and Alexander Albon — who tried to overtake Hamilton on the outside with 10 laps left, touched wheels and flew off track.

Hamilton was given a five-second time penalty for causing the collision, having earlier been hit with a three-place grid penalty after an incident in Saturday’s qualifying was reviewed by stewards.

Although Bottas started from pole position and Hamilton from fifth, it looked like a straight fight between the two Mercedes drivers as has been the case so often in recent years.

But late drama in Spielberg ensured otherwise and Hamilton’s time penalty meant Charles Leclerc took second place for Ferrari and Lando Norris sent McLaren’s garage into raptures — and threw all social distancing rules out of the window amid the euphoria — with third place.

It was the 20-year-old British driver’s first career podium and his superb final lap was the fastest of an exciting opening race. Norris became the youngest British driver to secure a podium finish and the third youngest ever in Formula One.