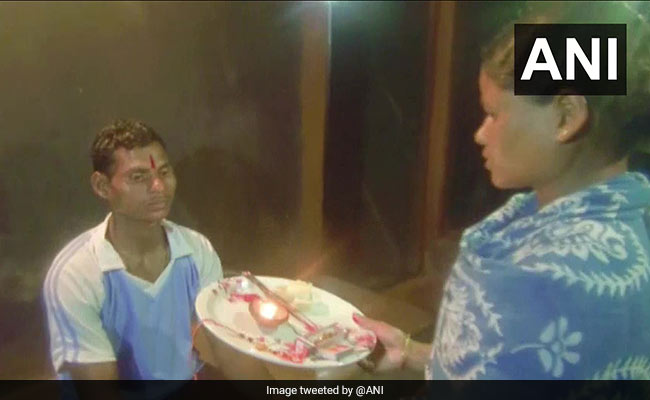 After not seeing his sister Lingay for all these years, Malla came to visit her

A Naxal, who had a bounty of Rs 8 lakhs on his head, surrendered in the Dantewada district of Chhattisgarh after his sister’s appeal to not to return to the jungles again on Raksha Bandhan.

Malla, who ran away from home when he was 12 and joined the Naxal movement, eventually rising up within their cadres, returned home after 14 years. He belongs to the Palnar village in the Dantewada district.

After not seeing his sister Lingay for all these years, Malla came to visit her. After the cursory visit, Lingay refused to let her brother leave and appealed to him to surrender to the police. She was reportedly afraid of losing her brother to the growing number of Naxalites who were being neutralised by the security forces in the region and feared for his life.

Upon being asked about his previous life, Malla said, “I was a platoon deputy commander from 2016.”

The platoon which he commanded, was the one situated in the “Bhairamgarh Area Committee” of the Naxal cadres.

Speaking to ANI, Abhishek Pallav, Superintendent of Police (SP) of Dantewada said, “Since he was the platoon commander of the Bhairamgarh area, he was involved in all major incidents which claimed the lives of police personnel in the last decade.”

“He has returned under the Lon Varratu scheme of the Dantewada district,” he added.

The Lon Varratu scheme is a local effort of the police departments of Dantewada, one of the worst-affected Left Wing Extremist areas in the country.

The scheme offers Naxalites to surrender to government authorities in return for a promise of being rehabilitated by being given employment of the surrendering Naxalite’s choice.

“Since he has just been arrested, we do not have the exact details of his involvement as of yet,” the SP concluded.