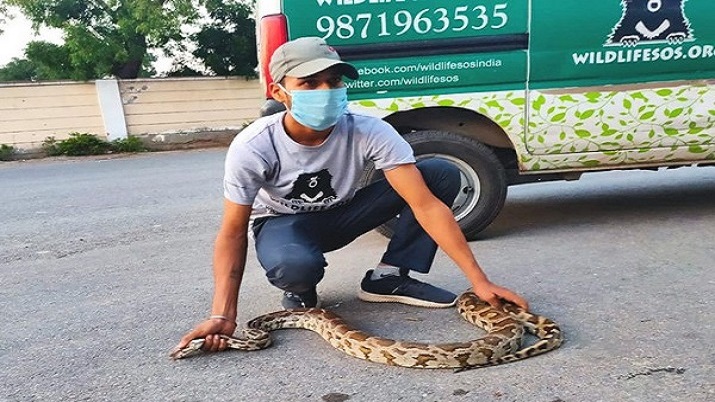 
A five-foot-long Indian rock python was rescued from the bus stop near Saket metro station in New Delhi, non-profit Wildlife SOS said on Tuesday. The incident came into notice when a passerby first noticed the large reptile sidle underneath the foot-over bridge near the bus stop. It was then reported to Wildlife SOS, a member of the NGO said. A Wildlife SOS team extricated the python from the narrow space and released it into the wild.

The Indian rock python is nonvenomous python species native to tropical and subtropical regions of the Indian subcontinent and Southeast Asia.

With rains flushing out snakes from their burrowed holes and shelters, wildlife rescuers have been receiving a large number of “distress calls” from Delhi-NCR, the NGO member said.

“We get maximum number of calls about reptile sightings in the monsoon season. From cobras and pythons to rat snakes and sand boas, our teams have been on their toes, Wasim Akram, the deputy director of special projects at the NGO, said.

No denial of vaccine or essential services for want of Aadhaar: UIDAI