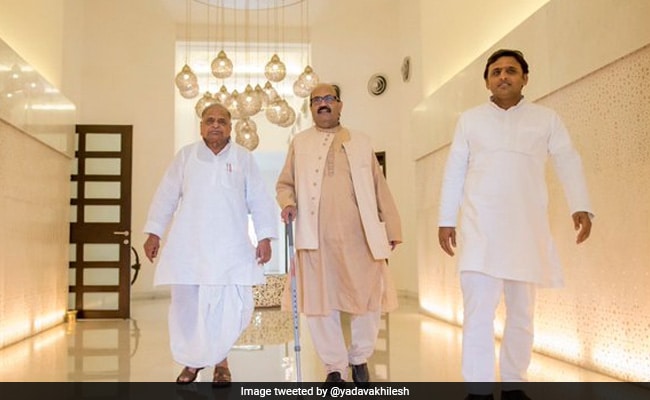 Amar Singh, in an interview later, had termed Akhilesh Yadav as “Aurangzeb”.

Samajwadi Party chief Akhilesh Yadav on Saturday expressed his condolences on the death of former party leader Amar Singh and said he had been deprived of his affection.

The two had differences and rise of Akhilesh Yadav in the party was seen as a reason for Mr Singh’s bitter parting of ways with Samajwadi party after he rejoined it in 2016.

“On being deprived of Amar Singhji‘s affection-care, my heartfelt condolences and tributes,” Akhilesh Yadav said in a tweet. He also posted a picture of him, Amar Singh and his father Mulayam Singh Yadav.

Amar Singh was expelled as a fallout of crisis in Samajwadi Party ahead of last assembly elections in Uttar Pradesh.

In a veiled reference to Amar Singh, Mr Akhilesh had blamed an “outsider” for the crisis in the party that spilled into the open after he stripped his uncle Shivpal Yadav of key ministerial portfolios.

Mr Singh, in an interview later, had termed Akhilesh Yadav as “Aurangzeb”.

Mr Singh had also recalled his contribution to Akhilesh Yadav’s life and said he had gone to Australia for his education and helped make him state president.