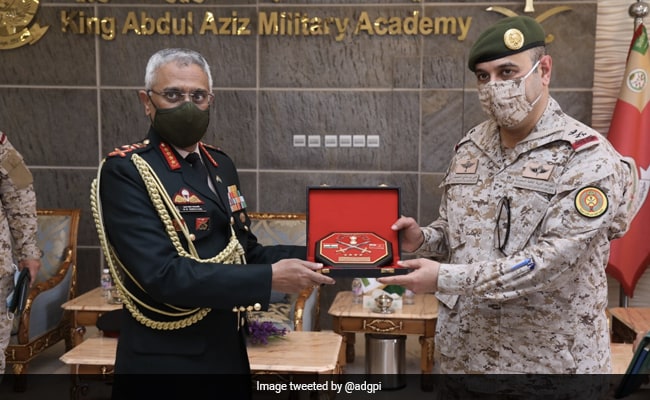 Gen Naravane, who arrived in Saudi Arabia on the second leg of his two-nation visit that included the United Arab Emirates, is the first-ever head of the Indian Army to travel to the two strategically important Gulf countries.

“COAS visit to #SaudiArabia will strengthen bilateral defence cooperation between the two countries,” the Indian Army’s Additional Directorate General of Public Information said in a tweet.

He also visited Saudi Armed Forces Command and Staff College and National Defence University, where he addressed the Faculty and student officers attending the War Course, the Indian Army tweeted.

His wife Veena Naravane and other delegates visited the TCS All Women Center in Riyadh. She appreciated the commitment of the TCS towards gender empowerment, investment and growth in Saudi Arabia through such initiatives, it said in another tweet.

She also visited Princess Nourah University and Wipro Women Business Park in Riyadh, which bear testimony to women enabling and empowerment, it added.

Gen Naravane’s visit is seen as a reflection of India’s growing strategic ties with the two key Gulf countries and is expected to further open up new avenues for cooperation in the defence and security sphere.

His visit comes in the midst of fast-paced developments in the Gulf region including normalisation of Israel’s relations with several Arab countries as well as situation arising out of the assassination of Iran’s top nuclear scientist Mohsen Fakhrizadeh.

Ahead of his visit to the UAE and Saudi Arabia, the Army said in a statement in New Delhi that his “visit is historic in the sense that it will be the first time an Indian Army chief is visiting the UAE and Kingdom of Saudi Arabia.”

Gen Naravane’s visit to the Gulf region comes days after External Affairs Minister S Jaishankar’s trips to Bahrain and the UAE during which he called on top leaders of the two countries.

Last month, the Army chief travelled to Nepal on a three-day visit that had significant diplomatic overtone.

In October, Gen Naravane travelled to Myanmar along with Foreign Secretary Harsh Vardhan Shringla on a very crucial visit during which India decided to supply an attack submarine to the Myanmar Navy besides agreeing to further deepen military and defence ties.