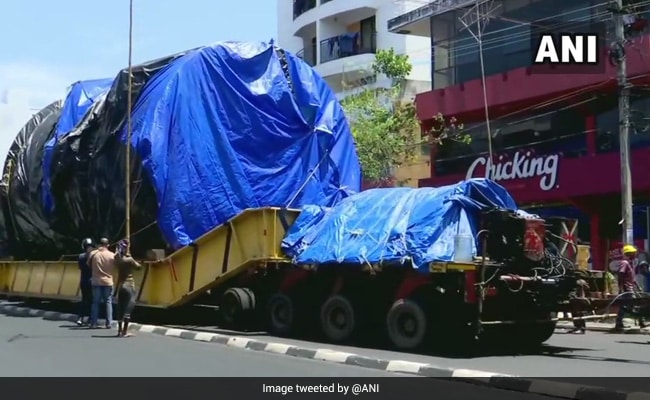 A truck that set off last year from Maharashtra carrying heavy, sophisticated machinery for a space research project at the Vikram Sarabhai Space Centre (VSSC), Thiruvananthapuram, reached the city in Kerala today.

“We started the journey on July 8, 2019, from Maharashtra. Now after travelling for one year and across four states, we have reached Thiruvananthapuram. We hope to deliver the cargo today at VRCC,” a staff member travelling with the cargo said.

The truck is carrying an Aerospace Horizontal Autoclave which is used to make weightless material. It started from Maharashtra a year ago for the VSSC in Thiruvananthapuram.

Finally, after travelling through four states moving 5 kilometres a day, it reached Thiruvananthapuram. There are 32 staff members accompanying the truck.

The machine weighs about 70 tonnes and has a height and width of 7.5 metres and 6.65 metres respectively. It was manufactured in Nashik and will soon be commissioned for the Indian space research project.

“We are using ropes to carry the cargo’s weight. It’s being pulled by two axles, front and back. Both have 32 wheels each and the puller has 10 wheels. The puller is pulling it all. Drop deck weighs 10 tonnes and the cargo weighs 78 tonnes. The weight is distributed on the two axles,” said the official.