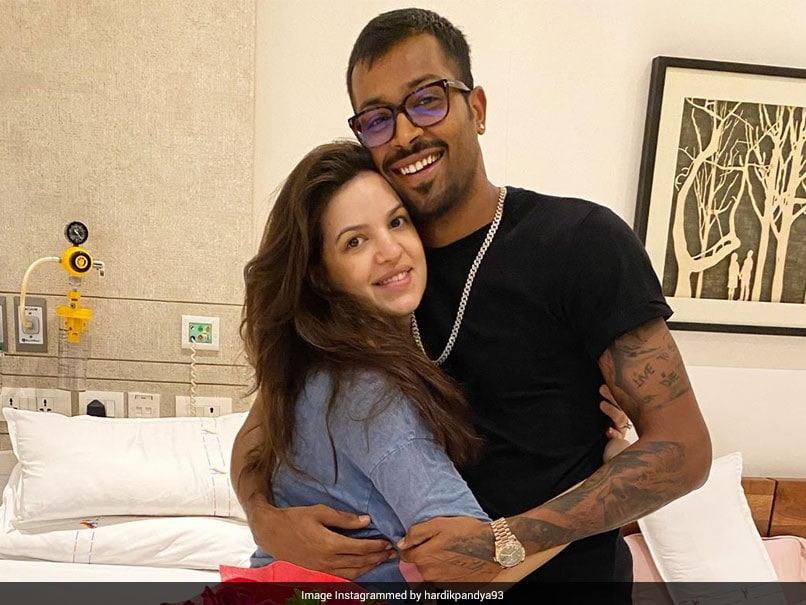 
Hardik Pandya took to Instagram on Sunday to share an adorable photo with his partner Natasa Stankovic, days after she gave birth to a baby boy. “Roses for my rose,” Hardik captioned the photo, in which he can be seen embracing Natasa who has a bouquet of roses next to her on her bed. “Thank you for giving me the best gift ever,” the India all-rounder added. Natasa Stankovic responded to the picture with a heart emoji and wrote “Love you”.


Hardik Pandya and Natasa Stankovic’s son was born on Thursday. “We are blessed with our baby boy,” Pandya wrote on social media.

Hardik Pandya on Saturday took to Instagram and gave his fans a first glimpse of his newborn son.

He also seems to be enjoying his dad duties. On Friday, he shared a picture on his Instagram story where he can be seen shopping for his new-born baby. Tagging Natasa, he wrote “Baby’s diapers are on the way”. In the picture, Hardik can be seen sitting in the driver’s seat, with baby diapers lying on the back seat of his car.

Hardik had made news of his engagement public on January 1 earlier this year and then in May broke the news of Natasa’s pregnancy. A day before Natasa gave birth to the child, Hardik had even shared the picture with his partner on their way to the hospital.

Hardik Pandya had missed international cricket for a long period due to a recurring injury and was set to make his comeback for the national team during the scheduled ODI series against South Africa.

But the series was cancelled due to the coronavirus pandemic, further delaying his comeback.

He will now be seen in action when the 13th edition of the Indian Premier League will get underway in September.