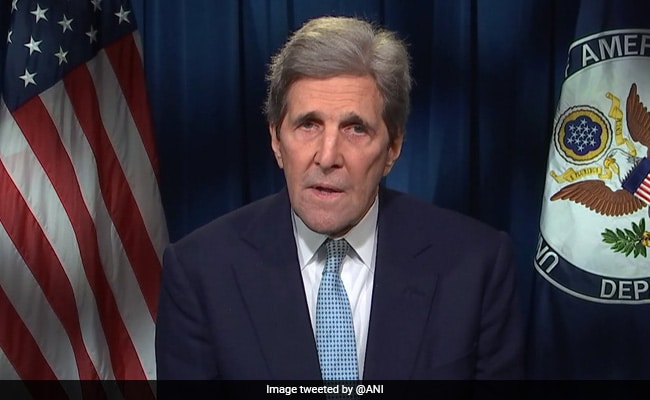 US Special Presidential Envoy for Climate John Kerry on Thursday said it will be great if India announces a net-zero emission target for 2050, but “that’s not an absolute requirement”.

He said with the implementation of India’s plan of 450 gigawatts of renewables by 2030, it will be one of the few nations helping “keep 1.5 degrees alive” (limiting global warming to 1.5 degrees Celsius compared to pre-industrial levels).

Net-zero means balancing the amount of greenhouse gases emitted into the environment by removing an equivalent volume. This may be achieved through various means, including restoring forests or through direct air capture and storage (DACS) technology, according to the World Resources Institute.

Mr Kerry emphasised that it is critical to take “real action between now and 2030” and nations need to raise their ambitions to meet the goal set out in the 2015 Paris Agreement on climate change.

Asked if it is practical to expect India to announce a net-zero target, he said, “Do I think it could be? Yes… but that wasn’t my message in my meetings with Prime Minister (Narendra) Modi. He understands the challenge.”

“It would be great if India wanted to say that but I don’t think that’s an absolute requirement. India is doing all the things that it needs to get us there… that’s better than a lot of nations,” he told reporters at a press roundtable.

In its bid to reclaim the global leadership in fighting climate change, the US is widely expected to announce a net-zero emission target for 2050 at President Joe Biden’s upcoming Leaders’ Summit on Climate.

According to Climatewatchdata.org, 59 countries, accounting for 54 per cent of global greenhouse gas emissions, have communicated a net-zero target so far.

China has said it will achieve carbon neutrality by 2060. India is the only major player holding out.

Mr Kerry said it’s helpful to get everybody to make the pledge. The US welcomes it, but what’s more important is real actions now from 2020 to 2030.

Serum’s Covishield At Rs 400 A Dose For States, 600 For Private Hospitals