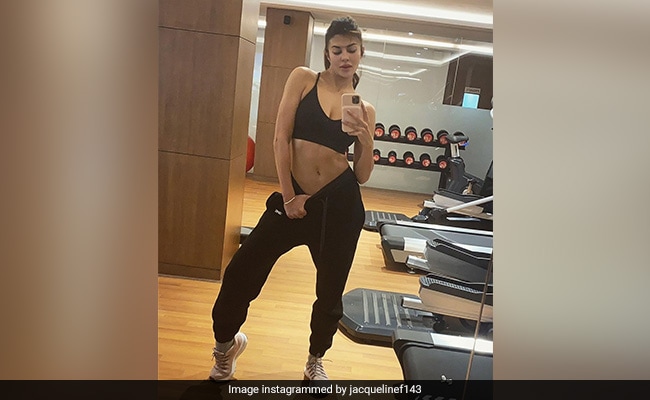 Jacqueline Fernandez raised the temperature on Instagram with her latest entry. The actress, on Monday, posted a stunning photo of herself from her workout routine and it is winning the Internet. Jacqueline, who is a fitness enthusiast, can be seen sporting a black gym outfit and clicking a mirror selfie in the post. She tied her hair in a ponytail. Instagramming the picture, Jacqueline accompanied it with a strong message. “They tell you to be yourself and then they judge you!” she wrote with the hashtag #chooseyourself. Jacqueline Fernandez‘s fans loved her workout picture. “Major fitness goals,” commented one fan while another wrote “amazing.” Many just dropped heart emoticons to express their emotions.

Jacqueline occasionally gives glimpses of her workout routines. Earlier this year, posting a video of herself performing yoga, she wrote about “dealing with anxiety” during the lockdown. “I have been dealing with some major anxiety these past few weeks… however being consistent with yoga has taught me the valuable lesson of being in the moment and what’s even more important… gratitude.. for life and being alive,” read her post.

Jacqueline Fernandez was filming Bhoot Police with Saif Ali Khan, Arjun Kapoor and Yami Gautam in Dharamshala last month. When team Bhoot Police flew to Himachal Pradesh, she shared a picture with her co-stars and wrote: “Time for Bhoot Police.“

Jaqueline Fernandez made her debut in Bollywood with the 2009 film Aladin. She went on to feature alongside Salman Khan in several films like Kick and Race 3. The duo will once again collaborate for Kick sequel.

The actress has also starred in films such as Murder 2, Race 2, Housefull 2, Housefull 3, Judwaa 2, Brothers and Saaho.