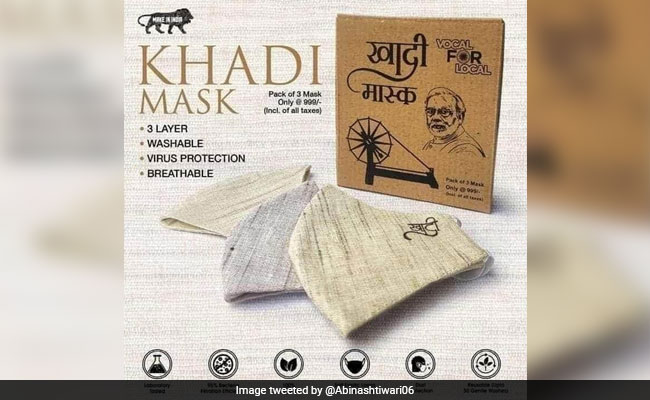 The masks had the Make in India, Vocal for Local logos along with PM Modi’s photo

Taking strict note of “fake” masks being sold in the name of khadi and advertised on the social media, the Khadi and Village Industries Commission (KVIC) on Monday lodged a complaint with the police against a Chandigarh resident.

In its complaint filed with the Senior Superintendent of Police in Chandigarh, KVIC alleged that a woman, Khushboo, was “unauthorisedly” selling face masks branding them as khadi and using the prime minister’s photograph on packets.

The masks being sold by the woman also had logos of khadi and the central government’s ‘Make in India’ and ‘Vocal for Local’ initiatives, besides the prime minister’s photograph to create a “false impression” that her portal has the authorisation of selling khadi products, it said.

Speaking about the complaint, KVIC chairman Vinai Kumar Saxena said, “We will not spare any individual or private firms that are misusing khadi’s name or unauthorisedly using the photograph of the prime minister on products or advertisements. This is a serious violation and a criminal act. Even in the past we have taken strict legal action against such violators.”

He said KVIC has also formed a team of legal experts to keep a strict watch over any such misuse of khadi’s brand name anywhere across the online marketing platforms as well as in markets to protect the interest of khadi artisans.

The complaint filed by KVIC said, “This not only created a wrong impression of khadi in public opinion but also misled the online customers looking for genuine khadi masks being sold exclusively by KVIC through its e-portal.”

The complaint further said it has come to the knowledge of KVIC that the Chandigarh woman indulged in the sale of masks in the name of “khadi mask” without any authority and without permission from KVIC.

It is further noticed that she is selling the mask by using the registered Word Mark “Khadi” and its formative mark and widely advertising it, the complaint said.

“Further, she is also using the photograph of the prime minister… in the advertising materials and it is not known whether the permission/ authorisation of the central government required under Section 3 of the Emblems and Names (Prevention of Improper Use) Act,1950, is obtained by her or not,” it further read.

Mr Saxena said it is pertinent to mention that KVIC has acted tough against any misuse of its brand name “Khadi India” and infringement into its trademark.

He said so far KVIC has issued legal notices to over 1,000 private firms, including Fabindia, for misusing its brand name and selling products under the name of khadi.

KVIC has also sought damages from these firms for causing harm to its reputation and loss of wages to khadi artisans due to sale of “fake” khadi fabric.

The KVIC in the complaint has requested the Chandigarh police to initiate criminal proceeding against the woman that includes seizing and confiscating of goods and all advertisement products, hoardings, promotional material, brochures, stationery, websites, social media handles, etc.