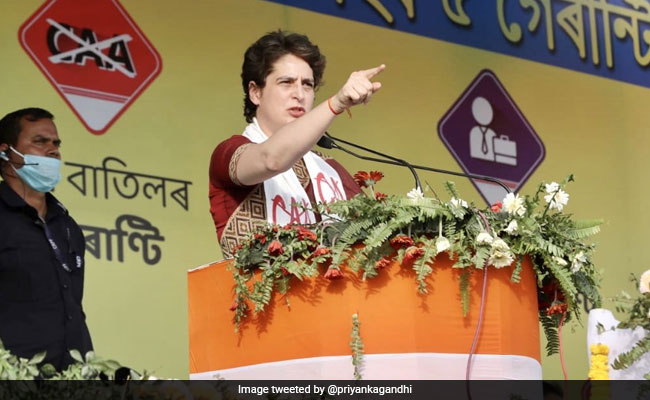 Congress leader Priyanka Gandhi Vadra, who is in Assam for the upcoming assembly elections, launched the party’s five-guarantee campaign on Tuesday.

A law that nullifies the Citizenship Amendment Act, five lakh government jobs, raising the daily wage of tea workers to Rs 365, free electricity up to 200 units per household and Rs 2,000 monthly income support to all housewives are among the “guarantees” Ms Vadra announced.

The Congress leader, while addressing a mega rally in Assam’s Tezpur, said that what she announced “wasn’t promises but guarantees”.

“This election is an election of trust. The people of Assam were cheated by a party five years ago that promised them 25 lakh jobs but gave them CAA instead. The Congress party is not making empty promises but giving five guarantees,” she said.

“We have studied the state budget and consulted economists and have come to the conclusion that the best possible is five lakh jobs in five years. Since this is a guarantee and not an empty election promise, we wanted to be honest and come up with a figure that is actually possible,” he said.

Priyanka Gandhi Vadra also slammed Prime Minister Narendra Modi for not speaking a word on CAA during his rally in Assam.

“PM Modi remained total silent on CAA during his rally in Assam. CAA is a threat for the identity of Assam, but the BJP government still brought this act. If our government came to power in Assam, we would nullify this act. The BJP had promised 25 lakh jobs but in the last five years they could give just 80,000 jobs,” Priyanka Gandhi said.

She also accused the BJP government in the state of selling the oil fields to the private parties who, she claimed, are close friends of them.

“You need a strong Chief minister who thinks for Assam and its people. So, this time you have to vote for Assam not for political parties. This upcoming election is the election of our fight for existence, “she said.

Explaining the rationale of the 5 guarantees, PCC Chief Ripun Bora said the party had identified the top issues facing the people through the ‘Asom Basaon Ahok’ Yatra and was now presenting its solutions to the public.

Debabrata Saikia, Leader of the Opposition in the Assembly, affirmed that the tea workers’ wages shall be increased to Rs 365 per day within 30 days of the Congress coming to power. He said this was a guarantee already undertaken by Rahul Gandhi. “We have studied the state of the tea business and we think that if tea workers in Kerala can get Rs 380 a day, then hard working tea workers of Assam can also get at least Rs 365. The tea planters can easily manage this and we will make it happen within 30 days,” he said.