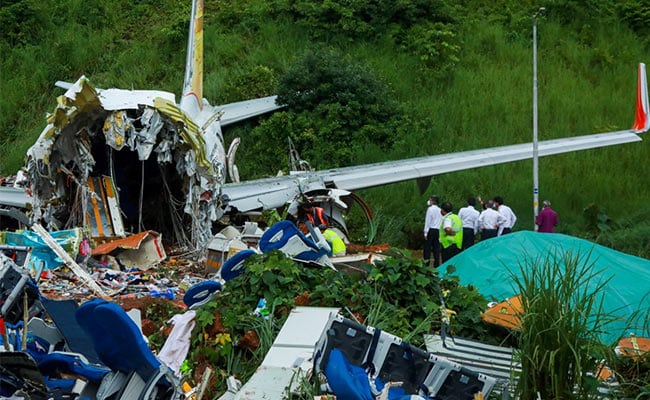 Dubai-based Indian expat Shemir Vadakkan Pathappiriyam is exhausted but overjoyed as all the seven members of his and his brother’s family survived the Air India Express plane crash in Kerala that claimed the lives of at least 18 co-passengers on Friday.

Since Friday evening, 41-year-old Shemir, who works as a logistics manager in Dubai Silicon Oasis, has been making frantic phone calls to different trauma centres in Kerala near the Kozhikode airport to get information of his family members on board the flight.

The Air India Express flight IX-1344 from Dubai with 190 on board overshot the tabletop runway at Kozhikode airport in Kerala on Friday night while landing in heavy rain and fell into a valley 35 feet below and broke into two, killing at least 18 people, including pilot-in-command Captain Deepak Sathe and his co-pilot Akhilesh Kumar .

“The news came as a real shock and we couldn’t contact them for a long time,” Mr Shemir told PTI.

“When I finally managed to speak to my wife, she told me that she and the other family members were rescued by the local people,” he said and thanked the authorities and the local people who rushed to his family’s rescue at the site of the crash.

Mr Pathappiriyam’s wife was travelling with their two daughters and a son. His brother Safvan’s wife and their daughter and a son were also on board the Vande Bharat flight from Dubai to Kozhikode.

Mr Pathappiriyam said the family members were wounded in the crash but their injuries are not life threatening. However, they are admitted in trauma centres of three different hospitals in Calicut and Malappuram in Kerala.

“My brother’s visa had expired, so we decided to send both the families together,” Mr Pathappiriyam said.

According to the Civil Aviation Ministry, the Boeing 737 aircraft was carrying 184 people, including 10 infants, 2 pilots and 4 cabin crew.

The Indian consulates in Dubai and Sharjah have activated five helpline numbers to provide information to the family members of the people who died and suffered injuries.

Abdul Manaf, another Dubai expat said he was relieved to finally get in touch with his wife Hadiya, and child, who are currently in a hospital in Kozhikode.

“Such a relief after speaking to her. You can imagine what I went through after hearing the news,” Mr Manaf told Khaleej Times. They were in Dubai for four months on a visit visa.

Dubai resident Abdullah and his wife were relieved to hear from their nephew a couple of hours after the accident.

He said, “my wife’s sister Zenobia Mohammed Ali with her two boys aged 4 and 15 were on the flight. The older boy Azam borrowed somebody’s mobile and called us. We are glad he is fine and was in a position to talk.

“My sister-in-law and her younger son have been spotted in two separate hospitals in Calicut. Our relatives there are trying to locate them. We don’t know what kind of injuries they have sustained but we are just indebted to God that they are alive,” he said.

According to India’s newly appointed Consul General to Dubai Dr Aman Puri, there were all kinds of Indians on-board the flight.

Over Rs 1 lakh crore investments in Maharashtra despite lockdown: Governor