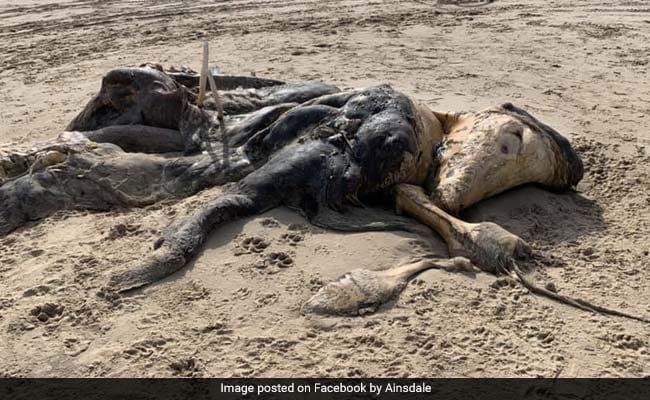 A bizarre-looking creature was found washed up on Ainsdale beach.

A mysterious 15-foot creature has been found washed up on a British beach, leaving locals stunned. According to Liverpool Echo, a man, who asked to remain unnamed, found the “smelly” carcass on Ainsdale beach on Wednesday, July 29.

“It had four flippers which made it look most weird. And it was furry,” the man said. “It was approximately 15ft long and had bones sticking out everywhere, approximately four feet long some of them. Stunk too.”

“It looked like it had an extra thing attached to it, maybe it was giving birth and died?” the man added.

Photos of the bizarre-looking creature were posted on the Ainsdale Community Group on Facebook, and have since gone viral online. The photos show the huge creature – which has since been dubbed the Ainsdale Anomaly by social media – lying on the sand.

The pictures have gone viral and collected over 500 comments – with many trying to guess what the creature could be.

“A woolly mammoth?” asked one person, adding: “Yes I’m aware they’re extinct but honestly what it looks like to me!”

“Maybe a whale that’s ate a cow,” another joked.

“It’s a walrus,” one Facebook user declared, while another said: “Horse, bull or cow?”

According to The Sun, Stephen Ayliffe, Senior Advisor at Natural England, said that the animal’s identity remained unconfirmed.

“We can confirm that an animal in a poorly decomposed state has washed up on Ainsdale beach, and whilst the identification of the animal is unconfirmed, it appears to be a species of whale,” he said.

“We are working with an animal removal company to have the animal’s remains removed from the beach as soon as possible.”

In 2017, beachgoers in the Philippines were left stunned when they saw the corpse of mysterious sea creature washed ashore.