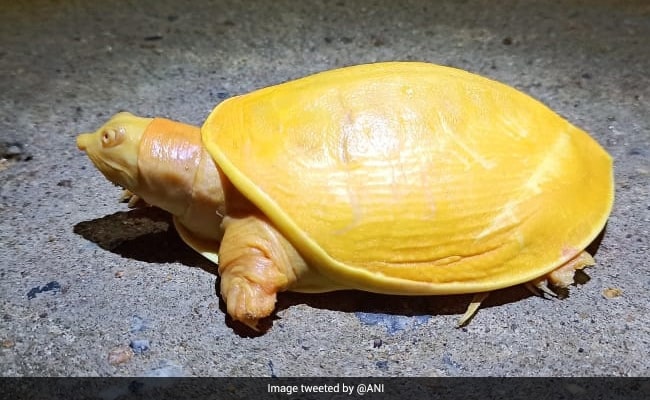 The yellow turtle was rescued by locals from Sujanpur village in Balasore district.

Residents of a village in Odisha’s Balasore district, 196 km from capital Bhubaneswar, witnessed a unique sight on Sunday. They spotted a turtle, yellow in colour.

A senior wildlife officer said it is a rare spotting.

“The whole shell and the body of the rescued turtle is yellow. This is a rare turtle, I have never seen one like this,” Bhanoomitra Acharya, Wildlife Warden, was quoted as saying by news agency ANI.

The yellow turtle was rescued by locals from Sujanpur village in Balasore district on Sunday. They called officials of the forest department to the spot and handed over the turtle to them.

“Most probably it was an albino. One such aberration was recorded by locals in Sindh few years back,” IFS (Indian Forest Services) officer Susanta Nanda wrote on Twitter, sharing a video of the turtle swimming in water inside what appears to be a vessel.

Most probably it was an albino. One such aberration was recorded by locals in Sindh few years back. pic.twitter.com/ZHAN8bVccU

In another post with a close-up photo of the turtle, he said, “Mark  the pink eyes, one indicative feature of albinism.”

Close snap of the same. Mark the pink eyes, one indicative feature of albinism. pic.twitter.com/MfXrXVYbfH

Several people on Twitter said they had never said a yellow-coloured turtle before.

Last month, a rare species of Trionychidae turtle was caught by fishermen at Deuli Dam in Odisha’s Mayurbhanj district, ANI reports.  The turtle was reportedly later  released by the forest department in to the dam. Trionychidae turtles are softshell turtles, found in Africa, Asia, and North America. According to the forest department, the turtle weighed more than 30 kilograms and its maximum life is 50 years, ANI reports.

(With inputs from ANI)