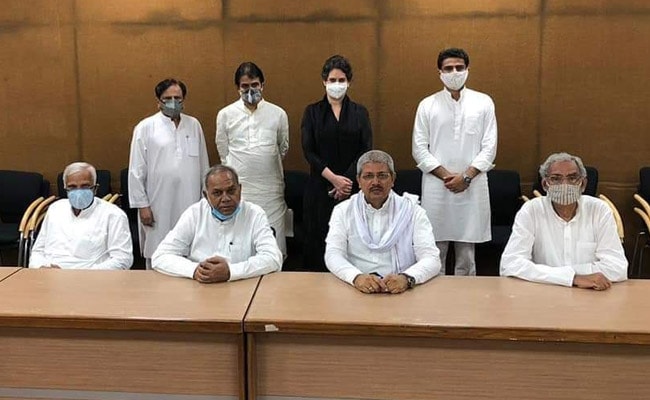 The Congress on Monday claimed a dramatic “breakthrough” in resolving the Rajasthan crisis. Rebel Congress leader and former deputy chief minister of Rajasthan, Sachin Pilot, “expressed his grievances” and he and the Gandhis had a “frank and conclusive discussion”, senior leader KC Venugopal said.

Sources said terms for “homecoming” of Mr Pilot were also discussed in his meeting with the Gandhis. A three-member panel, comprising Priyanka Gandhi Vadra, Ahmed Patel and KC Venugopal, has been set up to address his concerns.

Last night, after day-long deliberations to chart out a path for reconciliation with the party, Sachin Pilot told reporters that his rebellion was meant to flag “ideological issues”. Sachin Pilot had a meeting with Rahul Gandhi and Priyanka Gandhi to work a way out of the impasse days ahead of the Assembly session in the state which is scheduled to begin on August 14.

Here are the updates on the Rajasthan crisis:

Priyanka Gandhi Vadra On Congress Team To Address Sachin Pilot Complaints
Congress’s Priyanka Gandhi Vadra and senior leaders Ahmed Patel and KC Venugopal — who are on the promised three-member panel to look into the complaint of rebel leader Sachin Pilot — met Team Pilot this evening. The rebel MLAs have been asked to submit their apology for their actions with the Congress President, after which the disqualification proceedings against them will be withdrawn, sources said.
“Issues Were Ideological, Was Important To Raise Them,” Says Sachin Pilot
Congress rebel Sachin Pilot, after daylong deliberations to chart out a path for reconciliation with the party, told reporters on Monday evening that his rebellion was meant to flag “ideological issues”. He also thanked Priyanka Gandhi Vadra for “taking the time to hear us out”. Read Here