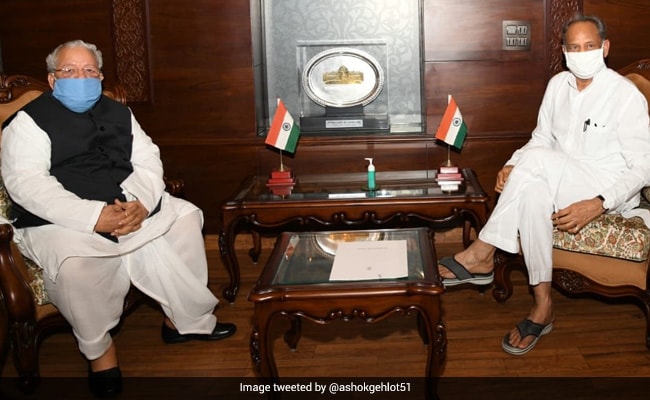 Rajasthan Governor Kalraj Mishra, in a statement today cancelling the annual Independence Day “at-home” event over what he called a spurt in coronavirus cases, delivered a message that Chief Minister Ashok Gehlot will not like to hear.

The Governor said he was concerned about the “frightening” situation in the state and the rising active virus cases.

“There were 3381 cases on July 1. Now it is more than 10,000. The unrelenting virus spread is a cause for concern and the state has to take serious steps to save people from this worldwide pandemic.”

The statement comes a day after Chief Minister Gehlot submitted his third proposal for an assembly session from Friday. It is seen as a hint that if the Governor nixes it again, coronavirus could be a legit reason.

Mr Gehlot, who is fighting rebellion by his sacked deputy Sachin Pilot, is seen to be pursuing an assembly session for the singular goal of proving his majority on the floor of the house. He believes he has just about the numbers to win a trust vote at this time and accuses the Governor of stalling a session under pressure from the BJP.

The Governor blocked two previous proposals raising questions including one on coronavirus precautions.

On the last request, Mr Mishra had asked how social distancing and other virus protocol would be maintained during a session.

Yesterday, Mr Gehlot met with his cabinet to discuss the Governor’s questions and sent a revised proposal for a special session citing coronavirus as an agenda.

To the Governor’s point on COVID-19 precautions, the Gehlot cabinet said it was up to the Speaker to ensure that all checks were in place. It also pointed out that Goa, Manipur and Puducherry had held sessions in the middle of the virus battle.

Mr Gehlot’s request to the Governor does not mention a trust vote. “We have a majority. We will prove it if required,” said a minister on Tuesday.