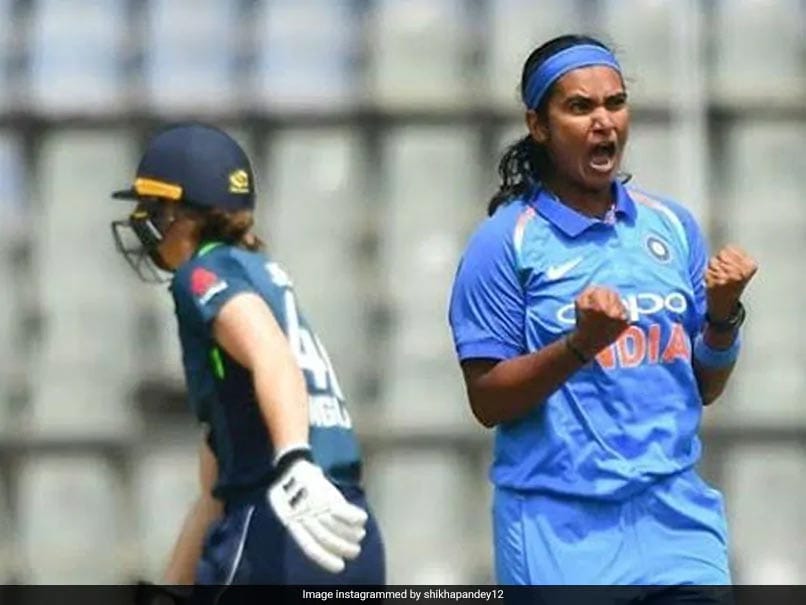 
“Pretty sure that we would see it happening in a year or two,” said an optimistic Shikha Pandey on being asked when can one possibly see a full-fledged Women’s Indian Premier League (IPL) going ahead. The Women’s T20 Challenge was played for the very first time in 2018 and in a one-off match, the Supernovas were able to outclass the TrailBlazers.

Then, in 2019, the BCCI organised a three-team tournament instead of a one-off match, featuring a new team called Velocity along with Trailblazers and Supernovas.

Shikha played the inaugural edition of the tournament for the TrailBlazers while in the 2019 edition, she represented Velocity.

This year, BCCI had scheduled a four-team contest in the Women’s T20 Challenge with seven matches compared to last year’s four. However, the coronavirus pandemic forced the postponement of the tournament.

In a telephonic interview with ANI, Shikha Pandey spoke about the Women’s IPL and how the competition can encourage more girls in the country to take up the sport.

“As a cricketer, if you ask me, having the high-intensity games and being able to play them would be a big plus for us, at the international level, you get to play high-intensity games, to have world-class cricketers playing alongside you, you get to learn so much from them in terms of their experience. With IPL matches being happening and them being televised, a lot of young girls would be able to watch it on television, it would be a huge thing as being a 90s kid I did not get the chance to watch televised women’s matches much,” said Shikha while speaking about the prospects of the Women’s IPL.

“It would inspire the younger lot to take up cricket. We have got a huge talent pool within our domestic cricket, I would say Women’s IPL should happen and I am very sure in another year or two, we will see a very well organised Women’s IPL. We have played Women’s T20 Challenge in 2018 and 2019, the kind of reception we got from the people that came to watch those matches was amazing, the stadium was jampacked, any international series we play in India, we have always received great support from the crowd,” added the pacer who made her debut in 2014.

The 31-year-old Shikha also talked about what prompted her to write a long Twitter thread, asking the concerned authorities not to tinker with rules to make women’s cricket more “attractive”.

There have been suggestions of trying out a smaller ball or shorter pitch for women’s cricket, but Shikha had suggested that rather than changing the rules, authorities should look to market the sport better.

Elaborating about her Twitter thread, Shikha said: “I have been hearing suggestions to make women’s cricket more appealing for a while now, there was a lot being said about the changes that were needed to be made in order to make women’s cricket more attractive, it was something I wanted to express, what I wrote in my Twitter thread was what I really felt.”

“There were many people who agreed with it, but I was happy that people who did not agree with my opinion also came out and talked about it. I was very happy with the very fact that people were coming out suggesting changes, it means they are thinking about women’s cricket and how it can grow,” she added.

Shikha was a part of the Indian squad that made the finals of the 2017 50-over World Cup and T20 World this year. The pacer talked about the impact of the finals of both the major tournaments.

India had missed out on winning both the tournaments, as the side faced loss against England in the 50-over World Cup final, while the Harmanpreet Kaur-led side faced defeat against Australia in the T20 World Cup’s summit clash.

Shikha, who has scalped 73 wickets in ODIs, also talked about her learnings from the losses the Indian side suffered in the finals of the two major ICC tournaments.

“Everyone’s mental setup is different, I have learnt a lot of things from the two finals that I played in, I always believe that you learn a lot more from defeats than from the success you have, holding your nerve in high-pressure situations is something I have learnt, to be able to think clearly is another thing I have learnt,” said Shikha.

The Indian women’s team was last seen in action in the finals of the T20 World Cup this year against Australia. After that, coronavirus pandemic forced all sporting events to come to a halt.

On being asked about how she spent her lockdown days, Shikha said: “The initial few days were a bit difficult, but then once I started following my routine, I had a timetable for myself, I have been working out twice a day, the trainer has been really helpful as he has been sending the programmes, I have been staying in isolation at Goa Cricket Indoor facility, I have spent a lot of time with my family, it is a privilege to be at home for this long.”

The Women’s 50-over World Cup is slated to be played in New Zealand next year and Shikha opined that the team would make sure that everyone is in the peak of their fitness when they get back to the field again.

“I cannot really assess the time I will require to get back into shape, I have been doing my conditioning sessions and I have kept them as a top priority, I have been doing everything to be in the best shape possible. I am hopeful that we have the 2021 World Cup next year on time,” Shikha said.