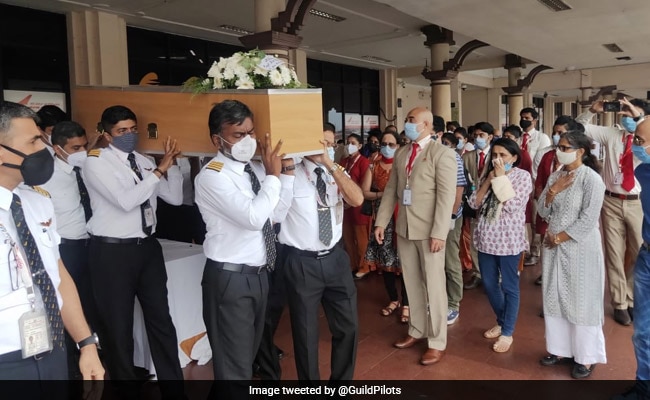 Air India pilots and crew gave a tribute to the Kerala plane crash pilots as their bodies were flown in before their last remains were sent home for final rites. Some offered flowers, some removed their wings and epaulets from their uniform and laid it in respect, the Indian Pilots’ Guild tweeted along with photos.

Akhilesh Kumar Sharma, the co-pilot of the Air India Express plane that crashed in Kerala’s Kozhikode two days ago, was cremated in Mathura today.

The last rites were performed at the Moksha Dham cremation centre and the pyre was lit by the pilot’s younger brother Rahul as his family was inconsolable.

Thread; A heartfelt tribute from our pilots and crew of @[email protected]@PilotsIndian. Some offered flowers, some removed their wings and epaulets from their uniform and laid it in respect. Rest In Peace, brothers ???????? ???????? pic.twitter.com/TYMK323YT1

Captain Deepak Vasanth Sathe and First Officer Akilesh Kumar, were in command of the aircraft that crashed.

Kozhikode district collector S Sambasiva Rao told PTI that the bodies were embalmed after conducting post-mortem at the Medical College hospital in Kozhikode and were handed over to the families by Saturday evening.

A resident of Mumbai’s Powai, Captain Sathe is survived by his wife and two sons.

The father of the Akhilesh Kumar, Tulsi Ram Sharma, sought a government job for Akhilesh’s wife Megha, who is expecting a child soon.

Akhilesh deserves the status of a “shaheed” as he sacrificed his life to save people on the plane, he said.