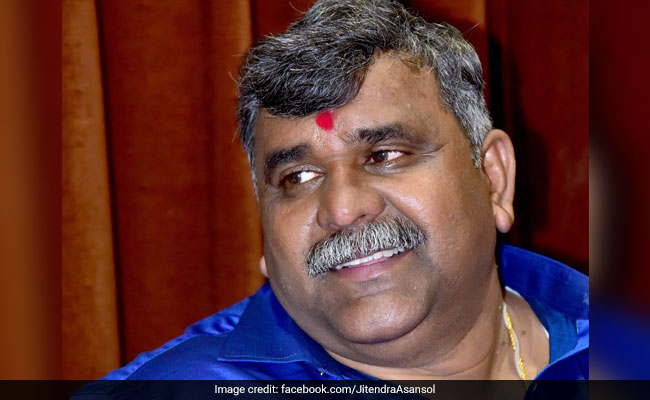 A Trinamool MLA who quit in December, then returned almost immediately, has finally exited Chief Minister Mamata Banerjee’s party just weeks before the Bengal election. Jitendra Tiwari, the vacillating lawmaker, joined the BJP today. The MLA from Pandaveswar was a key Trinamool face in Asansol.

Welcoming him into the BJP, its Bengal chief Dilip Ghosh said, “Jitendra Tiwari has changed his party today. He worked very hard for the Trinamool. One poriborton (change) has already started in Bengal, the other will also happen. Rajeev Banerjee and Probir Ghoshal (former TMC leaders) are also here with us.”

“Our party is growing everyday. And we are growing in Bengal also. Jitendra Tiwari is a big leader but he has joined us on a small stage,” Mr Ghosh added.

Jitendra Tiwari chanted the BJP’s slogan “Jai Shri Ram” and said: “This is something I have said since I was child. Today I can say it from a stage.”

He said the last two years, he had felt stifled in the Trinamool. “I am thankful that the BJP has included me in their family and given me space to serve the party. I can now say what I feel. I don’t want to make any allegations but for the last two years I could not say what was in my mind. I can now do that and I thank the BJP for giving me the opportunity to say what I feel. I have found myself to be aligned to the ideology of the BJP and I feel under Prime Minister Narendra Modi there will be change in Bengal.”

Sources say while his resignation and quick return to the Trinamool was seen as a change of heart after the persuasion of top party leaders, the delay was more from the BJP.

Union Minister Babul Supriyo, a key BJP leader in Bengal and the Asansol MP, was reportedly opposed to Mr Tiwari’s entry. He had reportedly said Mr Tiwari’s entry would upset BJP workers and also hinted that he was involved in a coal scam being investigated by the CBI. The hurdle has been removed for now. Interestingly, Mr Tiwari did not join the BJP in Asansol but in Hooghly district.

On December 18, Mr Tiwari’s dramatic return proved to be the only good news for Mamata Banerjee on a day of resignations. Mr Tiwari declared his resignation a “mistake” and, after meeting with senior leaders, told reporters: “I never said anything about Didi (Mamata Banerjee) or joining BJP”.

Five MLAs had quit back-to-back that day. Mr Tiwari had resigned along with Suvendu Adhikari, arguably the Trinamool’s biggest loss and the BJP’s star acquisition.

The Trinamool had then said “good riddance” after the exits that soon turned into a tide of leaders defecting to the BJP. Most of the defectors have openly or covertly attacked the influence of poll strategist Prashant Kishor’s outfit.

Though the BJP last month said “no more” Trinamool recruits, the trend continues well into the slog overs.

Bengal will vote in eight rounds over 33 days from March 27. The results will be announced on May 2.