A few years back, the top brass of the Indian Army’s Northern Command decided to put a twist to a war game. The Udhampur-based command, which defends a 2,000-km-long horseshoe-like territory from the plains of Jammu to the rugged deserts near the border of Uttarakhand, was examining the possibility of war with Pakistan. That year, they decided to throw China into the mix, what if the command had to simultaneously battle two countries? The war game was played out, saw China going on the offensive in the first two days with Pakistan joining in. The conclusions, as one planner put it mildly, were worrying. The army, even with the support of the air force, would find the going extremely tough. In an off-the-record media interaction a few years ago, a senior member of the present security establishment dismissed a two-front war scenario as “improbable” because it did not factor in India’s not insignificant diplomatic heft.

War games are not definitive, they often play out worst-case scenarios and illustrate cold hard ground realities for commanders who fight on the ground. One such reality is currently in play in what the government calls the “western sector”, the eastern shoulder of its newly created Union territory of Ladakh. The Indian army faces off against the Chinese PLA (People’s Liberation Army) which carried out one of its most determined incursions in decades in early May this year. The intrusions at three locations across India’s perception of the 800-km-long Line of Actual Control (LAC) in eastern Ladakh, are the biggest in recent years. The intruding troops encamped across the LAC could number over a thousand in all the locations with support troops, armour and artillery, in the rear behind the LAC. They are faced by an equal number of Indian troops as shown in mobile phone videos of the standoff (see pictures) at the Galwan River Valley and Pangong Tso which were widely circulated on social media.

Defence minister Rajnath Singh said in a June 2 TV interview that the PLA had intruded in “sizeable numbers” but that talks were on to resolve the standoff. A restoration of the status quo is expected at a June 6 meeting between the lieutenant generals of both armies at the Indian border point of Chushul-Moldo in Ladakh. This is the first meeting of Corps Commanders from both sides. Army officials say nothing less than a PLA pullback to their pre-May 5 positions will do.

The meeting will be held on the Chinese side of the border point, officials say, because the PLA had called for it. US president Donald Trump’s May 27 offer to mediate between the two countries, turned down by India, and a significant June 2 statement from secretary of state Mike Pompeo that ‘China had moved up its forces along the LAC’ also played a significant role in defusing the standoff.

Regardless of the outcome, the army will continue to be reminded of its vulnerabilities in the only theatre where it faces both its adversaries. The Galwan Valley in eastern Ladakh, where the Chinese soldiers are currently encamped, is barely 100 kilometres as the crow flies from the watchtower-like Saltoro Ridge overlooking the Siachen Glacier where Indian troops observe Pakistani positions. The PLA troops were part of an annual military exercise on the Tibetan plateau, who were then diverted to carry out the intrusions across the LAC when the war games ended. The plan, Indian military analysts feel, might have been at least three months in the making. “These (the intrusions) were not a local commander’s decision,” says Lt Gen. S.L. Narasimhan (retired), mem­ber of the National Security Council Advisory Board and a keen China watcher. “They were coordinated at the (Chengdu-based) Western Theatre Command at the very least.”

Government officials believe the Chinese probes are a direct fallout of the August 5 bifurcation of Jammu and Kashmir and Ladakh into Union territories. Ladakh, particularly a triangular wedge of territory the Indian Army calls ‘Sub Sector North’, becomes crucial in this equation. It sits between Gilgit-Baltistan, occupied by Pakistan, and Aksai Chin, the arid easternmost fringe of Ladakh. Analysts say the Chinese incursions are part of a wider strategy of throwing India off balance in a territory whose geo-strategic importance is only set to increase as the government expands its air and road infrastructure, allowing its troops to patrol hitherto inaccessible frontier regions.

“Ladakh is a lakshman rekha for India,” warns P. Stobdan, India’s former ambassador to Kyrgyzstan. “We cannot afford to allow the Chinese in here. Once they come here, they are entering a water-rich area with three rivers, the Shyok, Galwan and Chang-Chenmo.” 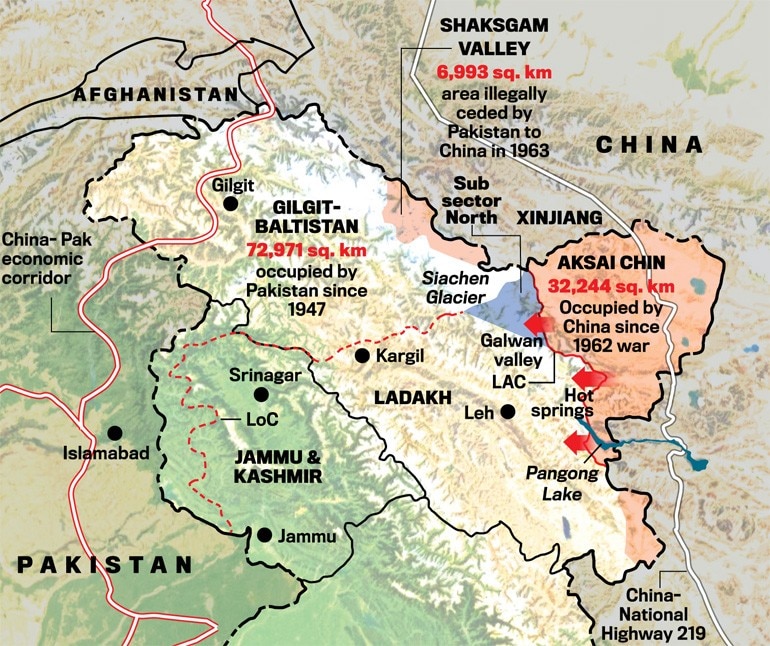 A large oil painting of a bearded, turbaned general on a rearing steed adorns the wall of the Maneckshaw Centre, the Indian Army’s sprawling glass-fronted convention hall in the military cantonment in New Delhi. General Zorawar Singh, who captured Ladakh for the Dogra rulers of Jammu and Kashmir in 1840, pioneered offensive high-altitude mountain warfare, the reason he joins a galaxy of Indian army greats. A map on the painting traces the general’s fascinating trans-Himalayan campaign route as his army marched out of the plains of Jammu, crossed the Himalayas and finally ascended the Tibetan plateau to die in battle facing the bitter cold and a combined Tibetan and Chinese army in 1841. Recognised as an independent kingdom by the British, Ladakh remained with Jammu and Kashmir even when Maharaja Hari Singh of Kashmir signed the Instrument of Accession and acceded to India on October 26, 1947.

The biggest alteration in the boundaries since China captured Aksai Chin in the 1962 border war with India and obtained the Shaksgam Valley from Pakistan in 1963 came in 2019. On August 6, 2019, Union home minister Amit Shah diluted Article 370 and bifurcated J&K and Ladakh into Union territories. Shah called Kashmir “an integral part of India” and, significantly, spoke about Aksai Chin, a territory over 37,000 square kilometres to the east of Ladakh, occupied by China in the 1950s. “When I talk about Jammu and Kashmir, Pakistan-occupied Kashmir and Aksai Chin are also included in it,” Shah said. It was the first time in several years that a top government functionary had mentioned the Chinese-occupied part of Ladakh.

A week later, on August 13, foreign minister S. Jaishankar flew down to Beijing to allay the Chinese leadership’s fears over the bifurcation. Jaishankar told his Chinese counterpart Wang Yi that the creation of Ladakh had “no implication for either the external boundaries of India or the LAC with China” and that “India was not raising any additional territorial claims”. Wang replied that the establishment of the Ladakh UT “which involves Chinese territory, has posed a challenge to China’s sovereignty and violated the two countries’ agreement on maintaining peace and stability in the border region”. The new map of Ladakh must have rung alarm bells in Beijing. It depicted Ladakh for what it really is, a gigantic swathe of territory the size of Andhra Pradesh, stretching from Afghanistan’s Badakshan province and including the provinces of Gilgit-Baltistan and, significantly, all of Aksai Chin. On December 5 last year, Shah reiterated India’s claim on Aksai Chin. “We are ready to give our lives for it,” he told the Lok Sabha.

Analysts like Stobdan believe the bifurcation has opened up a totally new geopolitical arena. India has changed the narrative on the LAC, and had forcefully reasserted its territorial claims. “As long as Ladakh was a part of J&K, China wasn’t a major factor. After the August 6 abrogation, the Chinese are saying that now that Ladakh is a separate entity, we have a stake here. They want to act before India starts internationalising Aksai Chin.”

The PLA stepped up its incursions in 2019, with a majority of them occurring in the western sector. The deployment patterns had begun changing on the Tibetan plateau years prior to this. Since the 73-day Doklam standoff in mid-2017, Indian military planners had begun to notice a change in the numbers and intensity of the PLA’s ann­ual exercises on the Tibetan plateau. It featured newer models of tanks, fighter jets and self-propelled artillery. The timing of the exercise was also interesting, most were being held in peak winter when the Tibetan plateau was largely unaffected but when 15-feet-high snow cut off the mountain passes of J&K and Ladakh.

Winter is when the Ladakh garrison, the Leh-based 14 Corps which guards the 800-km-long LAC, is at its most vulnerable. Snowfall between September and March cuts off the Srinagar-Leh and Manali-Leh highways which are vital for moving supplies to the 14 Corps.

But it will also take a full-fledged war, nothing less, for the PLA to march across the Shyok river. Such a scenario appears far-fetched at the moment, say military planners. The PLA are playing a high-altitude version of their traditional board game, Wei Qi, encircling rather than finishing off opponents. “Our perception of the LAC is immaterial to them. The PLA is now sitting on their perception of the LAC. If we actually look at the Ngari prefecture map (easternmost part of Tibet), the game becomes clear,” says Lt General D.S. Hooda, former Northern Army commander.

Lt General D.B. Shekatkar, who chaired a 2016 defence ministry committee on military reforms, sees the Chinese incursion as a ploy to throw the Indian army off balance and to increase the buffer zone between India and Aksai Chin. “They want to test our resolve and see how we react when they intrude into such a sensitive region,” he says. The Chinese, he feels, would like to increase their influence towards the Karakoram Pass, particularly areas like Daulat Beg Oldie, where we have built roads and a landing strip has come up to prevent an Indian military thrust towards Xinjiang or Tibet.

Locals in Ladakh have seen a gradual salami slicing of Indian territory over the years. A thin Indian army presence, they say, has seen many areas of Ladakh now literally absorbed as Chinese territory. Their greater fear is the altering of the LAC. “What is the LAC? It is not a permanent line, it has always been changing in favour of China. With every incursion, the LAC changes and they (the Chinese) usurp our pasture land. This time, too, they have done it,” says Rigzin Spalbar, former chairperson of the Ladakh Autonomous Hill Development Council. Ladakhi nomads are discouraged from grazing their livestock along the LAC by the army who is keen to avoid confrontations in central Ladakh near the Pangong lake. This reticence, he says, has cost India territory in the finger area overlooking the lake. “The Tibetan nomads on the other side come with their livestock and, invariably, the PLA follows in their wake.” Army officials say there is no question of the border being changed. The Indian army is unlikely to stand down or allow the PLA to have its way in the standoff. It may eventually be resolved and the PLA might even fold up its tents and go back. But even if they do, it begs the question: where along the 3,448-km-long LAC will they walk in next?