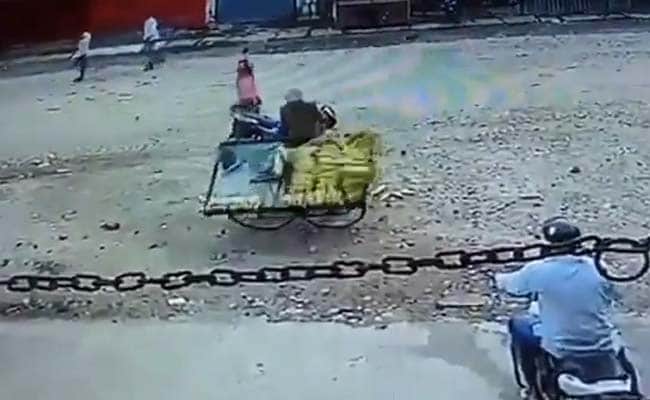 The clip shows a Varanasi Police sub-inspector throwing maize off a vendor’s cart in Shivpur area.

A sub-inspector in Uttar Pradesh’s Varanasi district has been suspended and a departmental inquiry initiated against him after he was caught throwing maize off a hawker’s cart and then upturning it in a video clip.

The deplorable act was circulated widely on the internet after which the police apologised to the hawker and compensated him for the loss.

The 30-second clip shows Sub-Inspector Varun Kumar Shashi scooping up cobs of corn off the cart of a maize vendor in Shivpur area of Varanasi and throwing them across the road, seemingly mindful that it doesn’t hit oncoming traffic but gets damaged. He then overturns the cart and rides away.

Within hours of the video going viral on Monday, the Varanasi Police released a clip of an officer apologising to the vendor for his colleague’s misbehaviour, assuring him of financial assistance.

“A video is going viral on social media showing Sub-Inspector Varun Kumar Shashi overturning a maize-laden hand cart in Shivpur area of Varanasi. The policeman has been suspended, departmental inquiry initiated. Compensation has been given to the handcart owner,” the Varanasi Police said in a statement.

It is not known what prompted Sub-Inspector Shashi’s outburst, but sources said the vendor was continuing to sell his produce even after the local lockdown came into effect at 5pm.

Weeks earlier in June and May, reports of the police damaging vegetables in small markets of Prayagraj and Meerut, respectively, were reported when the coronavirus lockdown was in place.

While a cop was suspended in Prayagraj, a departmental inquiry was initiated into the Meerut incident after outrage from the public and politicians who criticised the police for hurting people’s source of food and livelihood.