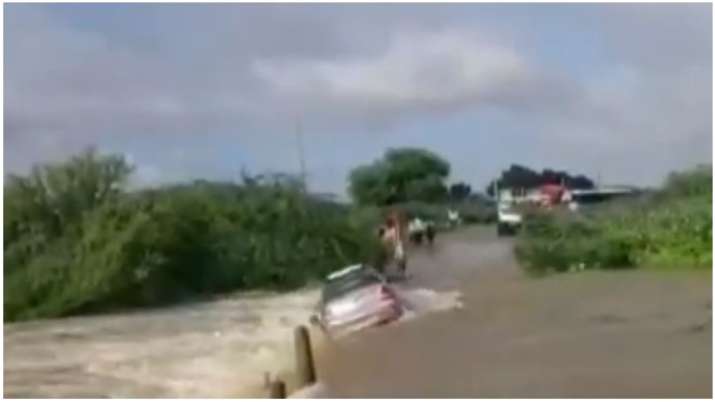 Monsoon has set in in India and heavy rains have ensured that streams are rivers are in full flow. The floods have caused devastation in Bihar and Assam and thousands of people are affected due to the calamity. Rains have lashed South India too. A viral video that is being shared widely shows how devastating the force of water can be. The video shows a car being swept away by the water in a stream.

The viral video has been shot in Anantpur District in Karnataka. As the car tries to cross what appears a small bridge on the stream, the water drags it off the bridge and washes it away with travellers inside.

#WATCH Andhra Pradesh: A car with 2 passengers inside gets washed away in Anantapur while crossing a rivulet. pic.twitter.com/LTKTLTltYU

Thge car was washed down the stream but luckily it was not washed all the way as water was shallow in some distance. Both the men were able to come out of the car.

It’s always dangerous to drive a vehicle through such a water body, and especially when it is flooded. What seems like an easy crossing may often turn into a life and death situation. The men in this car were lucky the stream was shallow. It may not be the case always.

The state of Karnataka has been witnessing heavier than normal rainfall. Normally, the state sees 455 mm rainfall between Jun 1 and July 30 (IMD statistics). This year however, the rainfall has exceeded the normal. Karnataka has received 480 mm rainfall.

WHO panel OKs emergency use of China’s Sinopharm vaccine