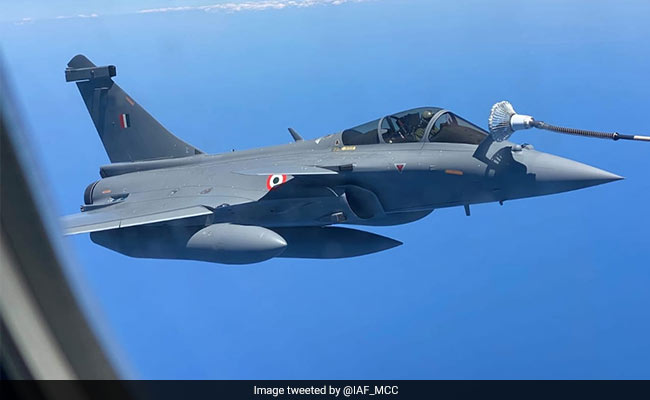 The first five of a batch of French Rafale fighter jets on way to Haryana’s Ambala to join the Indian Air Force fleet were welcomed by a naval warship to Indian Ocean this morning. The Rafale contingent established contact with Indian Navy warship INS Kolkata, deployed in the Western Arabian Sea, soon after taking off from the United Arab Emirates.

“Welcome to the Indian Ocean… May you touch the sky with glory,” the Naval warship is heard telling the Rafale commander.

The five Rafales escorted by 02 SU30 MKIs as they enter the Indian air [email protected]_MCCpic.twitter.com/djpt16OqVd

The jets – which took off from Merignac in southwest France On Monday and refueled midair – made a stopover at Al-Dhafra air base in the United Arab Emirates. They are expected to touch down at Ambala around 3 pm, after covering a distance of nearly 7,000 km.

Security has been tightened near the airbase, located around 200 km from the border with Pakistan. Prohibitory orders banning large gatherings have been in place in the city and people have been advised against going to rooftops to watch the jets.

Any filming and photography is also banned.

India had inked the Rs 59,000-crore deal to procure 36 Rafale jets from French aerospace major Dassault Aviation in September 2016. The Rafale jets are the country’s major acquisition of fighter planes in more than two decades.

The first jet was handed over to the IAF in October last year when Rajnath Singh had visited France.

The new fleet will be inducted into the IAF this afternoon, though a formal induction has been scheduled around mid-August. Theb jets will be stationed at strategically loctaed Ambala airbase as part of its No 17 Squadron, also known as the “Golden Arrows”.

Over Rs 1 lakh crore investments in Maharashtra despite lockdown: Governor