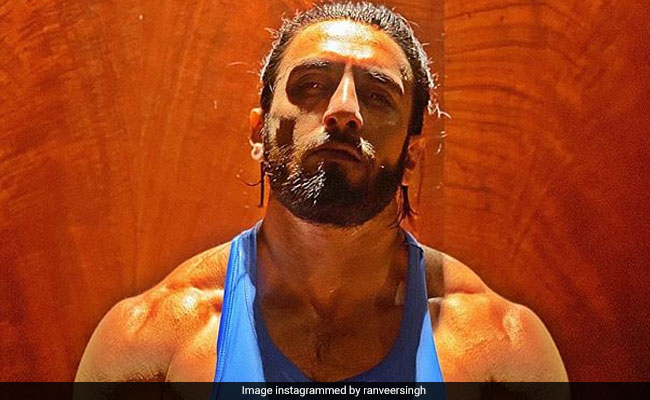 Ranveer Singh is killing it on Instagram – one post at a time. After sharing a throwback on Wednesday morning, Ranveer chose to Instagram a photo of his current self in the evening. And oh boy, Ranveer Singh’s bulked up biceps do steal the show and how. In the photo, Ranveer can be seen flexing his muscles with an intense expression on his face with his hair tied in his signature man bun. “Felt swole, might delete later,” Ranveer captioned his post, which was flooded with comments from fans, who can’t stop raving about Ranveer’s Khilji-like physique in the photo. Tiger Shroff, who is also a bona-fide fitness enthusiast, was one of the first celebs to comment on Ranveer’s photo – he dropped the fire emojis to which Ranveer replied: “The phenom approves.”

Let’s take a moment to appreciate how awesome Ranveer Singh’s photo is:

“Style mein rehne ka,” is what Ranveer Singh’s motto has been since he was a kid:

Before the nationwide lockdown was imposed, Ranveer Singh had wrapped the shooting schedules of two of his upcoming movies – ’83 and Jayeshbhai Jordaar. Directed by Kabir Khan, ’83 was scheduled to release in April but was postponed indefinitely as the coronavirus lockdown was imposed. Deepika also co-stars with Ranveer in the sports drama. Yash Raj Film’s Jayeshbhai Jordaar is expected to hit screens on October 2. Ranveer will also feature in a cameo in Akshay Kumar’s Sooryavanshi, which will release in cinemas. Ranveer’s upcoming projects also include Karan Johar’s period drama Takht.