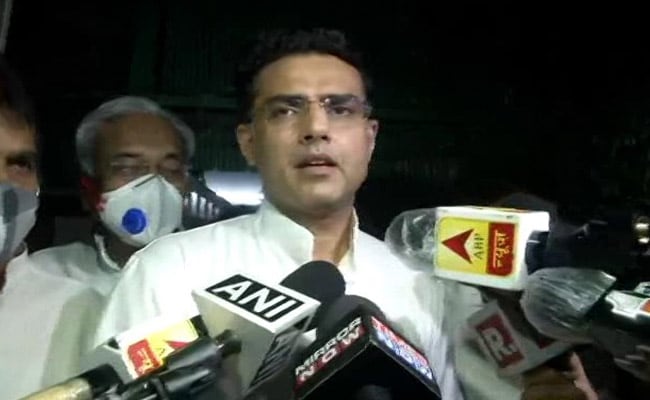 “I thank Sonia ji, Rahul Gandhi, Priyanka Gandhi and INC India leaders for noting and addressing our grievances. I stand firm in my belief and will continue working for a better India, to deliver on promises made to the people of Rajasthan and protect democratic values we cherish,” Mr Pilot tweeted.

The tweet came after Mr Pilot, along with his team, attended a meeting with a three-member committee that included Priyanka Gandhi Vadra, KC Venugopal and Ahmed Patel.

I thank Smt Sonia Ji, @RahulGandhi Ji, @priyankagandhi Ji & @INCIndia leaders for noting & addressing our grievances.I stand firm in my belief & will continue working for a better India, to deliver on promises made to the people of Rajasthan & protect democratic values we cherish pic.twitter.com/kzS4Qi1rnm

Taking to Twitter on Monday, Congress leader Abhishek Manu Singhvi welcomed “back” party leader Sachin Pilot as he lauded the “teamwork under Rahul Gandhi” over the resolution of the political crisis faced by party government in Rajasthan

“Welcome back Sachin. A constructive and enjoyable phase of Rajasthan building awaits. Congrats for teamwork under Rahul Gandhi, his tireless team, incl Venugopal, Surjewala Maken who became residents of my home state. Not to forget pol instincts of Gehlot which rarely fail him,” Mr Singhvi had tweeted.