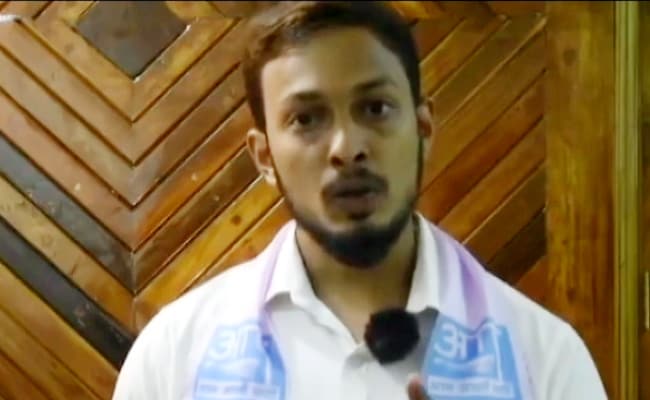 The Aam Aadmi Party (AAP)’s plans for Goa have just been given a leg-up by a quiet 26-year-old with no political connections. Hanzel Fernandes has won AAP its first-ever election in the seaside state that is key to the party’s national dreams. Though it is a local body election, AAP chief Arvind Kejriwal said it is “just the beginning”.

After its complete washout in its debut election in 2017, AAP plans to contest the next state polls in 2022.

Hanzel Fernandes’ phone hasn’t stopped ringing since his win. “This is a change that was needed and it is good people have decided to make a change. We have not made any fake promises. Our promises will be fulfilled. Just give us time and we will do it,” he told reporters this afternoon.

“This is just the stepping stone where we have won just one seat. But now we are going to rise. And we are going to win all the seats and with that we will do a lot of good work, not by destroying our beautiful state but by ensuring the best benefit from development in Goa,” he said.

The son of a carpenter, Fernandes followed in his father’s footsteps and joined his trade. But his mother, an environment activist, is more invested in his political career.

“It was tough fight. It was fight between big parties that already have a name and this is just a budding party coming up in the state. A youth with no political background has won the faith of the voters and that is immense success. I am very proud as a mother. I am happy they voted for him without any money or bribe being offered,” Geraldine Fernandes told NDTV.

Mrs Fernandes says her son’s focus will be on providing a clean government to Goa through AAP. “We can have a clean government and we can protect all this is left, especially our environment, the waterbodies, the fields, which are so important to each and every Goan.”

Goa has recently seen protests over coal mining and other infrastructure projects that environmentalists say are damaging the state beyond repair.

Hanzel Fernandes functions from his carpentry workshop in Benaulim, where he won the district body polls. He never planned to join politics.

He was inspired by environmental activists fighting for Goa’s disappearing greenery. When AAP started campaigning in the state, he gave his support. When the party needed a capable OBC candidate, he became the natural choice despite his political inexperience. Everything changed when some AAP leaders walked into his workshop one day, met him and his mother and offered to make him a candidate.

Goa’s ruling BJP has made big gains in the Zila Panchayat or district body elections, winning 32 out of 49 seats, while the opposition Congress has managed just four. Hanzel Fernandes won AAP its lone seat in Benaulim in south Goa.

With the Congress flailing in the state, AAP senses an opportunity and it has more than a year to prepare.

Its leaders in Delhi say the young Fernandes has energized the party’s rank and file and given them hope of repeating their Delhi success.

AAP today also announced that it will contest elections in Uttar Pradesh. While UP, India’s most politically vital state, has huge stakes, Goa seems to be a more realistic target for the party.

Arvind Kejriwal, the Chief Minister of Delhi, said, “The people of Delhi gave AAP just once chance and today they love the party so much that they have forgotten all other parties. You also give the Aam Aadmi Party one chance.”

Hanzel Fernandes says, “People voted for me because they saw a young person enter the political arena and offer an alternative politics beyond what the state has seen so far from the BJP and the Congress.”

“Vaccines Free Of Cost To All”: Mamata Banerjee To PM Ahead Of Polls

“Right To Silence Is Virtue In Noisy Times”: Facebook Boss To Supreme Court