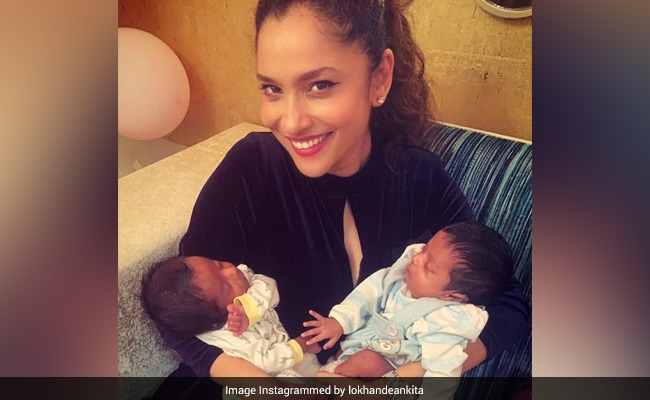 TV actress Ankita Lokhande shared a happy picture with two new members of her family. On Monday, the actress posted a picture on her Instagram profile, in which she can be seen flashing the brightest of grin as she poses with the twins. Ankita didn’t reveal who the parents were but she tagged her boyfriend Vicky Jain, Abhishek Srivastva, Varsha Jain, Reshu Jain in the post. An excited Ankita Lokhande, wrote in her caption: “Our family rejoices – a new life’s begun. Our circle is richer with the birth of these twins. Welcome Abeer and Abeera.” The comments section was flooded with congratulatory messages for the actress. Kasautii Zindagii Kay 2 actor Karan Patel was the first one to congratulate Ankita. “Aww,” wrote TV star Karanvir Bohra, adding a heart emoticon.

Ankita is reportedly dating Vicky Jain, who frequently makes appearances on her Instagram profile. In an interview with Bombay Times earlier, she said, “He is a very nice guy. He is a businessman from Bilaspur. Yes, I am in love and you will get to know about it when the time is right.”

Ankita Lokhande, who made her debut in Bollywood with Kangana Ranaut’s 2019 period-drama Manikarnika: The Queen of Jhansi, became a household name after she portrayed the role of Archana in the popular television show Pavitra Rishta, in which she co-starred with late actor Sushant Singh Rajput. They dated for six years and they parted ways in 2016.

Ankita Lokhande has also featured in TV shows such as Ek Thhi Naayka, Shakti – Astitva Ke Ehsaas Ki among others. She was last seen in Baaghi 3, which stars Tiger Shroff, Shraddha Kapoor and Riteish Deshmukh in pivotal roles.