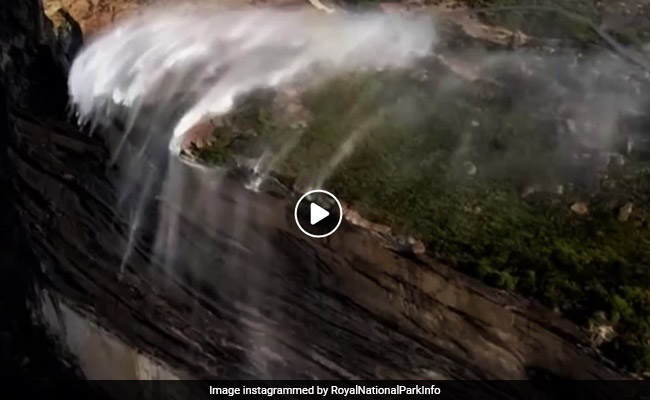 Torrential rainfall and wild weather in Australia have led to one of nature’s stranger phenomenons being captured on camera. At the Royal National Park near Sydney, water flew backwards over a cliff instead of falling down.

The spectacular reverse waterfalls were captured on camera this Monday as winds reaching the speed of 70 kmph battered the national park coastline. Videos posted to the Bundeena visitor site show strong winds blowing water in reverse – sending it flying over a cliff even as stormy waves crashed the coastline below.

The aerial footage captured two waterfalls close together on the side of the cliff top which, according to the Daily Mail, is part of a popular coastal walk near Bundeena.

You can watch the videos by clicking on the link below:

According to news website Esquire, meteorologist say that reverse waterfalls occur when high winds come off the ocean and hit the cliffs with such force that it pushes the water back up the way it came.

The town of Bundeena and nearby Maianbar faced minor flooding due to the weather. The town’s main ferry service had to be cancelled due to large sea swells, while a large boulder slid onto the road due to heavy rain, blocking access to the waterfall. Locals have been encouraged to stay home.