On Monday hours after a Manipur journalist was served a notice under the controversial new rules to regulate digital content, including that on news websites, it was mysteriously withdrawn.

On Tuesday it emerged the Information & Broadcasting Ministry had written to the Chief Secretary, to point out the issuing authority – a district magistrate – had no authority to send the notice.

The letter said powers under the new law, including “requirement of furnishing of information and disclosure of information, are to be administered by the Ministry of Information and Broadcasting, Government of India. These powers have not been delegated to the State Governments/District Magistrates/Police Commissioner”.

Kishore Chandra Wangkhem had been sent a notice under the Information Technology (Guidelines for Intermediaries and Digital Media Ethics Code) Rules, 2021.

He was directed to furnish “all relevant documents” about “Khanasi Neinast” – a program published via The Frontier Manipur on Facebook and YouTube.

“…failing which, steps as deemed fit shall be initiated without further notice,” the notice warned.

“I believe this is a direct assault, direct intimidation and a direct threat to freedom of press,” Mr Wangkhem, who has been in and out of jail since 2018 on charges of sedition and under the draconian National Security Act, responded. 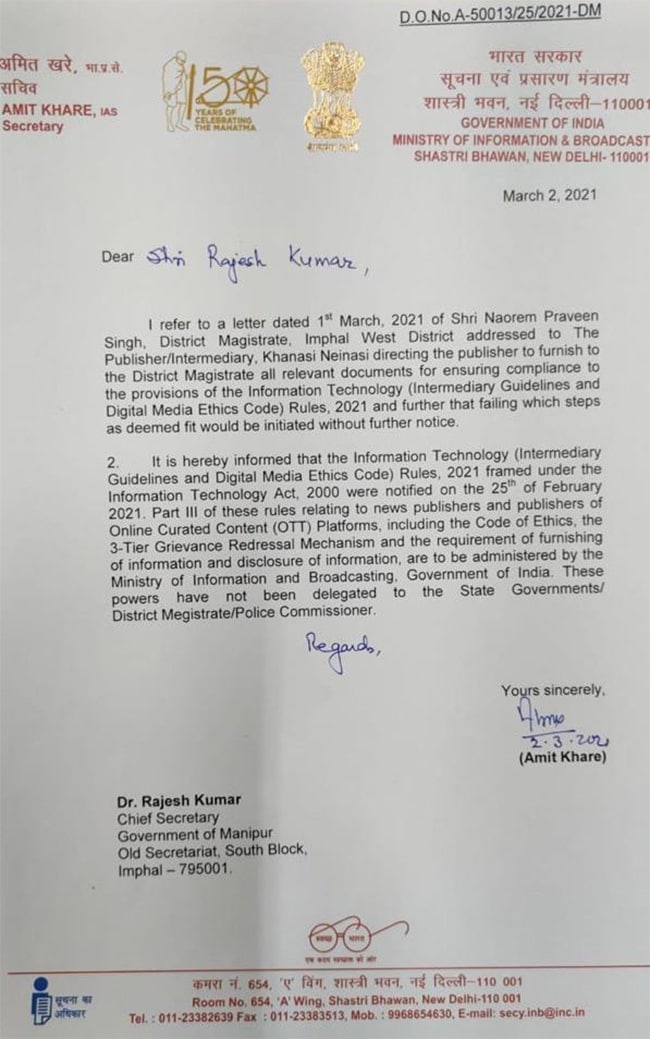 On Tuesday the IB Ministry wrote to the Manipur Chief Secretary

On February 16 Mr Wangkhem hosted a panel discussion on “repression, democratic space and free speech”. The program had five panelists – including Dhiren Sadokpam, a senior editor who was arrested under anti-terror law UAPA in January for an article in The Frontier Manipur.

“Ironically, this (sending of the notice) is what we were discussing during the talk show — the attacks on the media fraternity. The discussions we have always had have been about the welfare of journalists, the problems they face and the threats they receive,” he said.

“I don’t see why we were asked to furnish documents for discussing important issues,” he added.

The notice, issued Monday morning, was withdrawn by 6 pm; Mr Wangkhem found a second piece of paper pasted on the gate of his home.

“It is to inform you that this office notice of even number dated 1st March, 2021 served to you stands withdrawn with immediate effect,” it said, bearing the signature of Naorem Praveen Singh, the magistrate for Imphal’s West District.