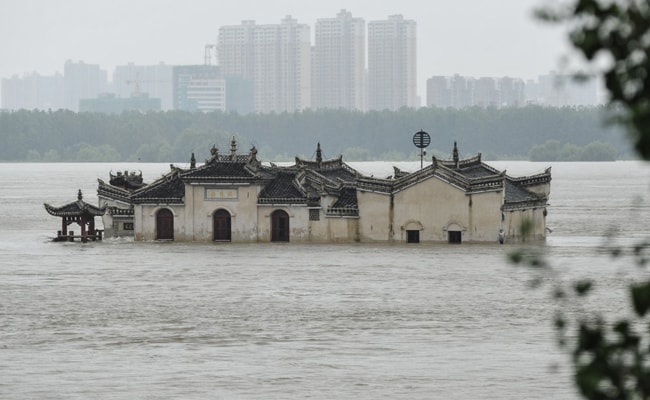 The Guanyinge temple, a 700-year old structure, is surrounded by flood water (AFP)

Chinese authorities blew up part of a dam in eastern Anhui province to relieve flood pressure, local media reported, as heavy rains continue to swell rivers across parts of the country.

Rising waters across central and eastern China have left over 140 people dead or missing, and floods have affected almost 24 million since the start of July, according to the ministry of emergency management.

Authorities have adopted measures such as diverting water into back-up resevoirs to keep levels manageable as major rivers and lakes hit record highs.

In Anhui, a dam on the Chu river was demolished Sunday as water levels inched close to historic highs.

Local authorities said the action was taken to ensure the safety of people living nearby.

“Affected by continuous downpours and upstream flows, the water level of the Chu River, a tributary of the Yangtze River, has moved from a slow rise to a sharp one,” local media said Monday.

The blasting of the dam was expected to reduce the level of the Chu River by around 70 centimetres (28 inches), reported the state-run Global Times.

A total of 35 rivers and lakes in Anhui saw high water marks exceed warning levels by Saturday noon — including the Yangtze and Huaihe rivers — reported the official Xinhua news agency.

Over the weekend the Three Gorges Dam also opened three floodgates after the water rose more than 15 metres above flood level.