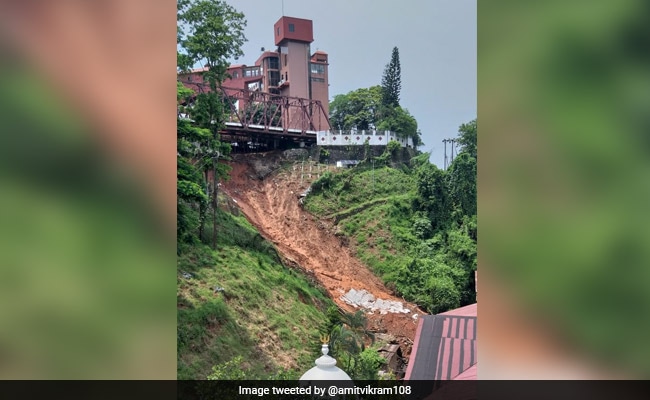 Due to incessant rainfall in last few days in Guwahati, several landslides have occurred: Official

A woman student was killed in a landslide near Raj Bhawan on Sunday, prompting the administration to ask people living in vulnerable areas to move to safer places, officials said.

The administration also closed down a hospital temporarily near Raj Bhawan, a guard wall of which has become vulnerable due to gradual sliding of land, they added.

The governor’s residence located in Kharghuli area of the city, however, is safe.

Another incident of landslide took place at Gita Nagar locality. A road and a house were damaged but no casualty was reported from there.

Officials said the college student Priyanka Boro was outside her home when a huge chunk of landmass from the hill above came down and buried her, killing her instantly.

Ms Boro was a student of Guwahati College and also an accomplished dancer who performed at various events across the country.

“Due to incessant rainfall for the last few days in Guwahati city, several incidents of landslides have occurred, leading to loss of lives and property. Moreover, there is every possibility of occurrence of more such landslide incidents in the coming days,” an official said.

The authorities of Kamrup Metropolitan district, which primarily comprises Guwahati city, ordered the closure of Borthakur Clinic and Hospital at Kharghuli and asked for shifting of its patients to nearby facilities immediately.

The hospital is located just below the backside of Raj Bhawan, a guard wall of which is vulnerable due to erosion of land.

“The guard wall may fall at any time and may cause damage to the lives and properties of patients, doctors, paramedical staff of the hospital,” Kamrup Metropolitan Deputy Commissioner Biswajit Pegu said.

He also appealed to the people residing in landslide- prone areas to vacate their houses and shift to safer places till the monsoon season is over.

Following the landslides, the Union home minister talked to Mr Sonowal and Health Minister Himanta Biswa Sarma to enquire about the incident and the flood situation in the state.

“Spoke to Assam Chief Minister Shri @sarbanandsonwal and Shri @himantabiswa to take stock of the alarming situation in Brahmaputra river and landslides near Guwahati. All possible help has been assured to the State. Modi government stands firmly with the people of Assam,” he tweeted. Altogether 18 people have died in the flood which affected nearly 9.3 lakh people in 23 districts of the state.

“Thank you Shri @AmitShah ji on behalf of the people of Assam. With your support and guidance, we will surely overcome every challenge that we are facing at this moment,” Sonowal said on Twitter:

Mr Sarma too tweeted about Mr Shah’s call and his assurance about all support from the National Disaster Response Force (NDRF).

“I express my heartfelt gratitude to @AmitShah ji for his concern for the people of Assam in this hour of distress,” he added.