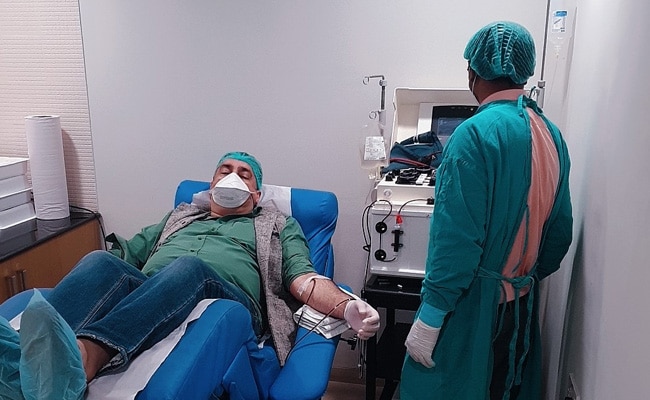 Karnataka will give Rs 5,000 to those coronavirus survivors who donate their plasma. (Representational)

An incentive of Rs 5,000 will be given as a “gesture of gratitude” to COVID-19 patients who donate their plasma after full recovery, the Karnataka government has said, adding that this is meant to encourage such donations to help save lives the as state reported the highest single day spike in coronavirus cases.

With convalescent plasma therapy, or CPT, emerging as one of the most promising lines of treatment for COVID-19, plasma donation by Covid survivors has become as important as increasing the supply of key medicines and searching for a vaccine. Many cities with A high caseload have reported a shortage of plasma, as well as medicines such as Remdesivir and Tocilizumab.

Medical Education Minister Dr K Sudhakar told NDTV that they were expecting more than 1,000 people to register themselves for this incentive-based donation system.

An average of 400-500ml plasma is collected per donation. Each critical patient is administered 200ml in under two hours.

“Now, since around 18,000 people have recovered in Karnataka we have announced an incentive for those who can donate their plasma. The CPT has been quite successful in Karnataka. We were the second state in India to use this treatment methodology. More than 80 per cent people who received plasma have been completely cured; even those who were on ventilator have shown improvement,” he said.

To deflect any criticism to putting a monetary value on a potentially life-saving gesture, the minister said, “This system is one-of-its-kind. It is not to humiliate anybody, it is just a token of appreciation and gratitude from the government.”

State capital Bengaluru has seen a massive surge in coronavirus numbers. Bengaluru, which had less than 600 cases at the start of Unlock 1.0, has crossed the 22,000-case mark. The state has reported more than 47,000 cases.