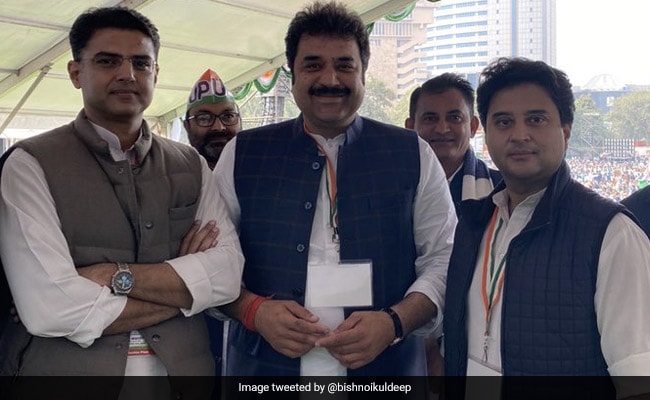 Haryana Congress leader Kuldeep Bishnoi today said there is a sense of despair among party workers over the treatment meted out to young leaders like Jyotiraditya Scindia and Sachin Pilot, and also urged the leadership to promote mass leaders in every state in the fight against the BJP.

Taking on the old guard, he asked the Congress leadership to give other responsibilities to those who have been occupying high positions for 35 years and have never contested elections.

Mr Bishnoi, who is son of former Haryana Chief Minister Bhajan Lal, triggered speculation when he posted a picture of himself with Mr Scindia and Mr Pilot on Twitter.

“Many congratulations @JM_Scindia. A well deserved one,” he said along with the picture, on a day when Jyotiraditya Scindia took oath as Rajya Sabha member of the BJP.

While Jyotiraditya Scindia left the Congress, Sachin Pilot has raised a banner of revolt against Chief Minister Ashok Gehlot in Rajasthan and is on the verge of quitting, even though he has said that he is not joining the BJP.

“Jyotiraditya Scindia and Sachin Pilot are very good friends and their leaving the party is hurting the Congress a lot. The treatment meted out to them by the party, there is a sense of despair among the party workers. I am a Congressman by birth and will never quit it,” Mr Bishnoi said later in a video posted on Twitter.

“I want to tell the high command to bring mass leaders forward as they are the people who can give a fight to the BJP. Those people who have been occupying high posts for 30-35 years, who never fought elections, they should be given other responsibilities as we are headed towards a big war,” he said, while taking a swipe at the old guard within the Congress.

His remarks brought to the fore the rift between the old and the young within the Congress.

Mr Bishnoi has been disgruntled for some time now. He earlier formed his own Haryana Janhit Party and was a part of the NDA, but later quit them and is now in the Congress. He has been a two-time MP from Hisar and Bhiwani and is currently an MLA representing Adampur constituency in Haryana.