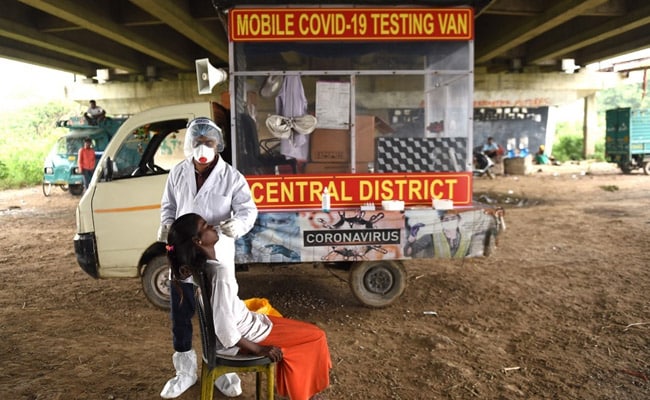 A health officer collects swab samples to test for COVID-19 in Delhi. (AFP)

India has scaled the peak of COVID-19 testing with more than seven lakh tests in a single day, the country has conducted nearly 500 tests per minute in the last 24 hours, a senior health ministry official said.

According to the health ministry, the nation has been doing more than six lakh tests in a single day for the last several days. In the past 24 hours, India has done about 7,19,364 tests.

“Such high level of testing will also lead to a high number of daily positive cases, however, states have been advised to firmly focus on comprehensive tracking, prompt isolation, and effective treatment, following the Test, Track, Treat strategy. States reporting higher Case Fatality Rate (CFR) have been able to bring fatality rate below 1 per cent,” the official said.

India has also recorded the highest number of recoveries in a single day with 53,879 COVID patients having recovered and discharged on Saturday, the official informed.

“Higher number of recoveries is a result of the focused implementation of the various actions taken collectively by the Centre and State/UT governments to combat the virus pandemic. Due to these efforts, the CFR has further slumped, touching an improved rate of 2.01 per cent as on August 9,” the official said.