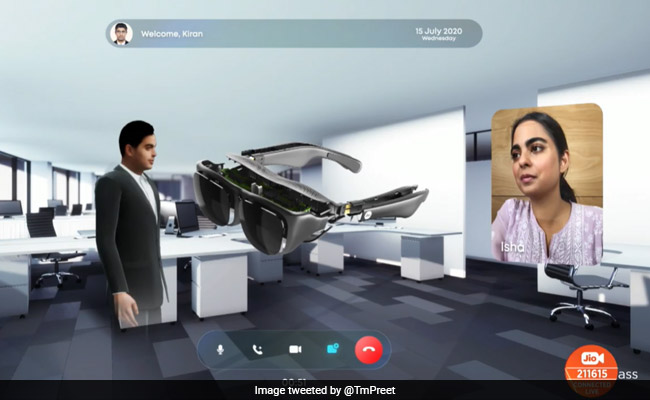 Reliance Industries’ 43rd Annual General Meeting had a number of key announcements and some high-profile attendees. Billionaire Mukesh Ambani announced a slew of deals, including an investment of Rs 33,737 crore in its digital serves arm, Jio Platforms, by Alphabet Inc’s Google. Among other announcements, the company showcased a new Mixed Reality solution called Jio Glass – the demo of which was presented by Isha and Akash Ambani.

The company did not reveal the pricing and the availability details about the product. However, they did showcase a very innovative demo as to how the Jio Glass will work when it is made available to the public.

“Hello Jio, please call Akash and Isha,” Kiran Thomas, the company President said, after which Jio Glass made a call to the siblings. Akash Ambani appeared in a 3D avatar whereas Isha Ambani joined in using a 2D video call interface. During the call, they demonstrated how Jio Glass will make meetings easy and interactive and even indulged in a conversation.

With Jio Glass, you can exchange digital notes and presentations, Kiran Thomas added.

Jio Glass is designed for teachers and students to enable 3D virtual rooms and conduct holographic classes via the Jio Mixed Reality service in real-time. Jio Glass will also help with virtual meetings.

“Jio Glass is making teachers and students come together in 3D virtual rooms and conduct holographic classes through our Jio Mixed Reality cloud in real-time. With Jio Glass, the traditional way of learning geography will now be history,” Mr Thomas said.

Not much is known about the specifications of the product except that it will weigh 75 grams and will need to be connected to a smartphone with a cable to power it. The company has said that it will come with 25 in-built apps to allow augmented reality video meetings and more.

The AGM also had a cameo by Alphabet CEO Sundar Pichai who in a video spoke about the recent partnership with Jio. Reliance has partnered with Google for its Jio products – both companies will collaborate with each other to develop Jio Glass.

Google and Jio will be partnering to build and Operating System that can build a 4G or entry-level 5G phone – the focus of which will be to help 350 million Indians, who still use a 2G phone switch to 4G phones. Mukesh Ambani said the focus is a “2G-mukt” (2G-free) India.