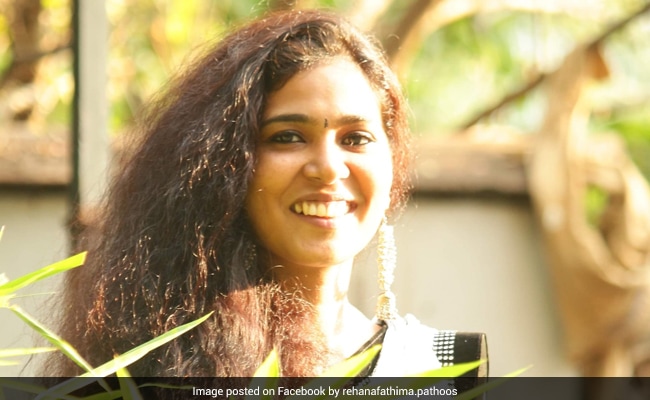 Rehana Fathima raised questions of law relating to the application of POCSO.

Rehana Fathima, controversial activist from Kerala, has approached the Supreme Court challenging a Kerala High Court order denying her anticipatory bail in the case related to a video of her children painting on her semi-nude body.

Fathima approached the top court contending that case against her violates her fundamental right of life, liberty, and dignity under Article 21 of the Constitution.

She, in her petition submitted on Monday, stated that she fully cooperated in the investigation and her conduct has been exceptional.

Recently, the Kerala High Court had refused to grant pre-arrest bail to her and observed that the video amounted to an obscene representation of children for the purposes of “sexual gratification” and attract offences under Section 13 of the Protection of Children from Sexual Offences Act (POCSO) and Section 67B of Information Technology Act (IT Act).

Fathima raised questions of law relating to the application of POCSO and the provisions of the IT Act law against her. Nudity per se cannot be treated as obscenity, Fathima said challenging the invocation of Section 13 of POCSO by the High Court.

Fathima, in her plea before the top court, said, “Goddesses in Kerala are frequently depicted in idols and murals with bare breasts. When one prays at the temple the feeling is not of sexual arousal but one of divinity.”

“Whether female nudity (even when not visible) per se constitutes obscenity? Whether children painting on their mother’s body can be concluded to be ”sexual gratification” and ”child abuse” under these stringent laws?” Fathima asked.

The plea said that there can probably be “nobody except a pervert” who would be aroused to “sexual desire” by seeing the nature of the work.

“The petitioner’s message accompanying the uploaded edited video makes it clear that she intended to normalise the female form for her children and not allow the distorted ideas of sexualisation to pervade their minds,” the plea said.