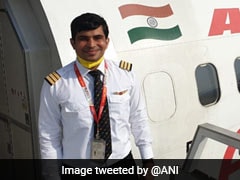 Co-pilot Akhilesh Kumar was scheduled to go home on August 15, his brother-in-law said

His body was brought from Kochi to the Delhi Airport at 2:25 am today, and will now be taken to his native place in Mathura, Uttar Pradesh.

About 200 Air India members paid tributes to Mr Kumar and observed two minutes of silence and prayed for the officer.

“Our last conversation with Akhilesh was on Raksha Bandhan on a video call because the ‘Rakhi‘ could not reach him. He was wearing a ‘Kalava‘. He was scheduled to come home on August 15, 16 but God had other wishes,” Mr Kumar’s brother-in-law told ANI.

The Air India Express flight, which was part of the Vande Bharat Mission, had crash-landed at the Kozhikode airport yesterday killing 18 persons including the two pilots.

Don’t Teach Us Hindutva, Why No Bharat Ratna For Savarkar Yet: Uddhav Thackeray To BJP

1 in 4 people in the world will have some degree of hearing loss by 2050: WHO