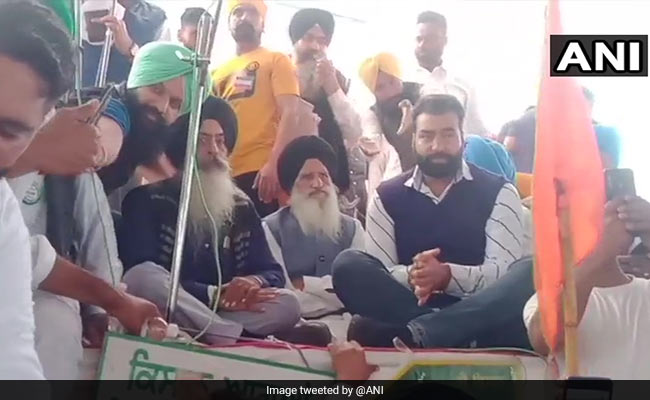 Lakha Sidhana (white shirt and sweater), was seen at a rally in a Punjab village on Tuesday

Lakha Sidhana, the gangster-activist wanted by Delhi Police in connection with violence at the Red Fort in Delhi last month, was spotted Tuesday at a rally in Punjab’s Mehraj village – which is the hometown of Chief Minister Amarinder Singh.

The rally, called for by Sidhana himself, was to show support for farmers protesting against the centre’s new agriculture laws and demand the release of those arrested by the police.

“If Delhi Police comes to arrest anyone in Punjab, villagers will gherao (surround) them,” Sidhana said, referring to speculation Delhi Police could cross state borders to capture him.

During the tractor rally held by farmers in the national capital on Republic Day, Sidhana, aka Lakhbir Singh, allegedly instigated protesters to turn violent. The clashes saw hundreds fight with police at multiple locations in the city, including the iconic 400-year-old Red Fort complex.

In a video posted on Facebook on Friday, Sidhana had asked people to turn up in large numbers at Mehraj village, which is in Bathinda district, today to show their support for the protesting farmers.

“We have been agitating for seven months. Now, this protest is at its peak… we are holding a big programme in village Mehraj in district Bathinda on February 23,” Sidhana said in the video.

Sidhana, who has been in and out of jail several times, faces at least 10 criminal cases, including land-grab and murder, in Punjab.

There had been some doubt whether he would be present at the rally, given he is wanted by Delhi Police. A reward of Rs 1 lakh for information on his whereabouts had been announced.

Farmer union leaders have distanced themselves from both Sidhana and Deep Sidhu, the Punjabi actor also accused of inciting clashes during the tractor rally.

The farmers are holding their mahapanchayats in Sirsa and Fatehabad districts of Haryana.

Farmers across the country have been protesting against the centre’s laws since late-November, when tens of thousands drove tractors to Delhi and have since been camped around its borders.

After eleven rounds of failed talks, and several nationwide demonstrations, they took out a tractor rally in Delhi on Republic Day – for which permission was given on condition that only certain routes were followed.

However, on the day of the rally, a large group deviated from that route and clashed with police.

“Will Go To Singhu, Sit With Farmers”: Activist Nodeep Kaur Out Of Jail