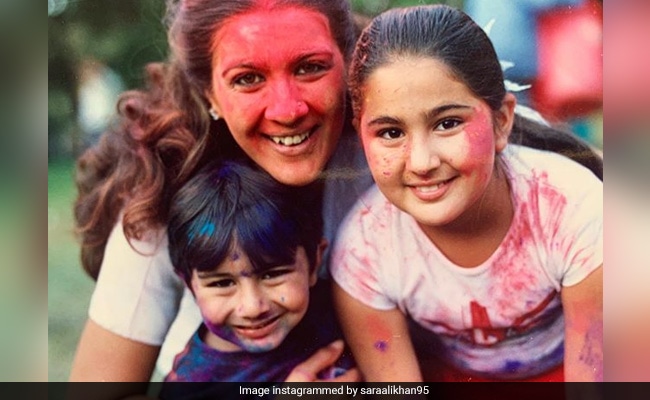 Sara Ali Khan is a poet and her poems turn out to be the quirkiest when she’s captioning throwback photos on Instagram. “Mother, daughter- Iggy Potter. Riot of colours with water slaughter. Mommy so young I almost forgot her. Gulaal we threw, off-guard we caught her. But it was healthy fun with no totter. After all she’s mother dearest – the OG fautor,” Sara captioned her latest throwback entry. We’ll simplify it for you – Iggy Potter is her brother Ibrahim and “OG fautor” (which means original protector/supporter) is their mother Amrita Singh. The childhood photo that accompanies the poem is a priceless throwback memory with pint-sized versions of Ibrahim and Sara, with coloured smeared faces, can be seen posing for a shot.

Here’s Sara Ali Khan blending poetry and throwbacks like this:

Years after the Holi memory, Sara Ali Khan and her “OG fautor” are still posing but now, they look like this:

Sara Ali Khan’s feed is filled with mom appreciation posts. When Sara’s first look from her debut film Kedarnath released, fans noticed Sara’s striking resemblance with her mother. Over the years, Sara has been telling us the same: “Jaisi maa waisi beti.”

Meanwhile, Sara Ali Khan described her dad Saif Ali Khan with an interesting bio and a major blast from the past: “The one person that has always been the definition of peace, the epitome of love and the personification of Mickey Mouse. Love you Abba.”

Sara Ali Khan recently revealed that her driver has tested positive for COVID-19. She, her family members and domestic staff tested negative. Sara was last seen in Imtiaz Ali’s second Love Aaj Kal film, also starring Kartik Aaryan. Sara’s next film is Coolie No 1, in which she co-stars with Varun Dhawan.