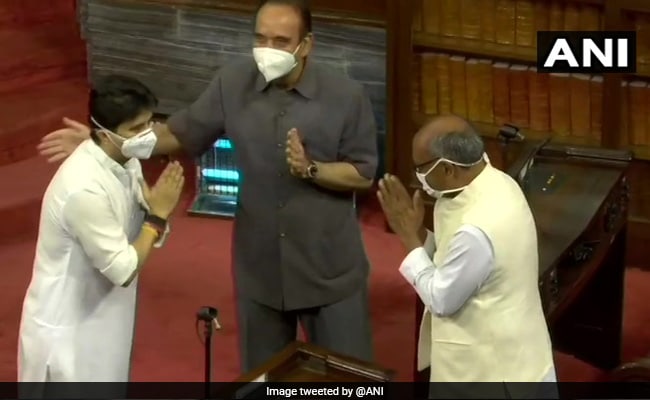 Jyotiraditya Scindia, sworn in today as a Rajya Sabha member of the BJP, came face-to-face in parliament with former Congress colleague Digvijaya Singh. The two leaders greeted each other with folded hands, betraying none of the animus that marked their ties in recent months.

Jyotiraditya Scindia was among 61 newly-elected Rajya Sabha members who took oath while the house is not in session. Before being sworn in, he greeted not just Digvijaya Singh but also Ghulam Nabi Azad and Mallikarjun Kharge, whom he will face across the house for the first time.

On social media, the image drew a deluge of comments, with some users commenting that masks worn for coronavirus had come in handy to hide what the leaders really felt about each other. One comment in a “caption this” challenge noted that both had made it to the Rajya Sabha; the race for the upper house was said to be among the reasons Mr Scindia had been upset with the Congress.

Mr Scindia joined the BJP in March after an acrimonious exit from the Congress, his party of 19 years. In doing so, he took along 22 MLAs in Madhya Pradesh, whose departure left the Congress government in a minority and enabled the BJP’s takeover.

In the weeks before he made his decision to switch over to the BJP public, Mr Scindia, 49, went silent and virtually ghosted senior Congress leaders including Digvijaya Singh and then Chief Minister Kamal Nath, his bitter in-house rivals in Madhya Pradesh.

Today’s meeting was perhaps his first interaction with any Congress leader after nearly four months, that too in the middle of an almost identical crisis for the Congress in the form of Sachin Pilot in Rajasthan.

Sachin Pilot, also once a Rahul Gandhi acolyte like Mr Scindia, launched a revolt earlier this month against Rajasthan Chief Minister Ashok Gehlot, who has accused him of trying to pull down his government by bribing MLAs to defect to the BJP.

Digvijaya Singh said on Sunday that Sachin Pilot “should not follow Jyotiraditya Scindia into the BJP”, saying he had “bright future” in Congress.

The Congress veteran said he tried to call Mr Pilot but his calls and text messages went unanswered.

“Age is on your side. Ashok (Gehlot) may have offended you, but all such issues are best resolved amicably. Don’t make the mistake that Scindia made. BJP is unreliable. Nobody who joined it from any other party has succeeded there,” Mr Singh said in an interview to PTI.