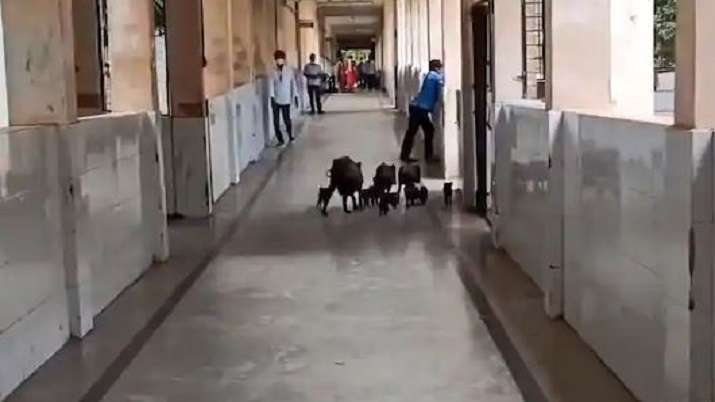 Four pigs and half a dozen piglets were seen in a corridor of a state-run hospital in Karnataka’s northern Kalaburagi district, an official admitted on Sunday. “As one of the doors was open, the pigs strayed into the corridor of the hospital’s general ward in search of food, which some in-patients throw in the dustbin in the corner,” a district health official, speaking on condition of anonymity, told IANS on phone.

The official hastened to clarify that the corridor was not in the hospital’s Covid ward, which is sanitised and where entry is restricted.

Though the pigs were seen strolling in the corridor and exiting from the open door 2-3 days ago, their video clip went viral on the social media on Sunday.

“As the city is under lockdown again since July 15, civic workers have not been reporting to work daily to keep the premises secure from dogs and pigs, which stray into the hospital some times in search of food,” said the official.

Incidentally, the country’s first coronavirus fatality was a 76-year-old man from Kalaburagi who tested positive after he died at a private hospital in Hyderabad on March 11.

Reacting to the incident, state Health Minister B. Sriramulu said he directed the district hospital staff to act against the pigs’ owner for letting them off free to roam outside and stray into the hospital.

“The video clip of pigs in the Kalaburagi hospital clip is 3 days old. All the pigs in the vicinity have been captured and relocated. I have told the hospital to ensure such an incident does not recur,” Sriramulu told reports at Ballari when the incident was brought to his notice.

Ready to sit in opposition if I lose confidence motion: Pakistan PM Imran Khan in his address to nation