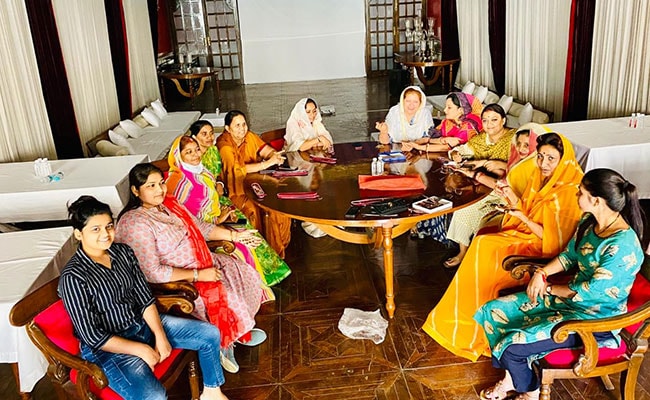 The Rajasthan Congress MLAs loyal to Ashok Gehlot are at resort in Jaisalmer.

Women Congress MLAs loyal to Rajasthan Chief Minister Ashok Gehlot in his battle with rebel leader Sachin Pilot were seen celebrating Kajari Teej, applying henna on their hands, at a hotel in Jaisalmer on Thursday. Almost none of women sitting around a circular wooden table are seen wearing face masks as a precaution for COVID-19.

Holed up at luxury resorts in Rajasthan since the crisis began last month with former Deputy Chief Minister’s open revolt, around 100 MLAs have been seen exercising, watching movies and playing antakshari.

Over the last few days, a number of MLAs have spent their time touring Jaisalmer, famous for its yellow sandstone architecture, running on treadmills, practising yoga, and posing with peacocks in photographs.

On Monday, Mr Gehlot himself was seen taking a brief break from the political crisis to celebrate Rakhi, albeit with no apparent sign of social distancing, in images posted to his Twitter account.

The photographs and video come ahead of next week’s assembly session where Ashok Gehlot is expected to take a floor test to prove his majority in the face of Sachin Pilot’s revolt.

After days of back-and-forth and allegations that he was helping the opposition BJP poach legislators, Governor Kalraj Mishra had finally agreed to call an assembly session as requested by the Chief Minister.

The Congress government in the state was pushed to the edge after open revolt by the disgruntled Sachin Pilot, who has claimed the support of 30 MLAs. However, of the claimed 30, only 19 have made their position official so far and are sequestered at resorts in BJP-ruled Haryana.

Mr Gehlot, on the other hand, says he has 102 MLAs in his corner – one over the majority mark. He is eager to hold a trust vote once the Assembly is in session next week and cement his position; if he wins he cannot be challenged for six months.