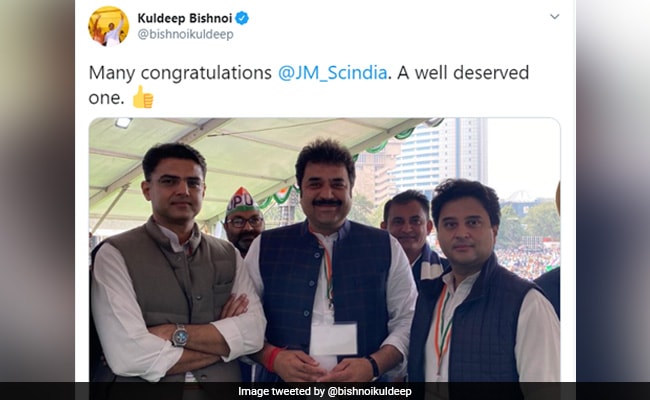 Sachin Pilot – who has been living at a resort in Haryana for more than week out of sight of the media and the Rajasthan Police — today appeared in a photo tweeted by former colleague Jyotiraditya Scindia, flanking Congress’s Kuldeep Vishnoi. Mr Vishnoi, a three-time MLA from Haryana and a former electoral ally of the BJP, had tweeted the throwback photo to congratulate Mr Scindia, as old and new Rajya Sabha members took oath today.

Mr Scindia, who joined the BJP in March with 22 MLAs, has been rewarded with a seat in the Upper House by the party. He had lost his Lok Sabha seat in last year’s elections, which also saw Rahul Gandhi lose his family turf Amethi to the BJP.

Once the most prominent young faces in the Congress, Mr Pilot and Mr Scindia share a warm personal rapport. After Mr Pilot’s rebellion, last wee which triggered a crisis for teh Ashok Gehlot governmnet in Rajasthan, Mr Scindia had tweeted a dig at the Congress.

“Sad to see my erstwhile colleague, @SachinPilot too, being sidelined and persecuted by Rajasthan CM, @ashokgehlot51 . Shows that talent and capability find little credence in the @INCIndia,” his tweet read.

Since March, Mr Pilot has been expected to follow Mr Scindia’s footsteps, bringing the other state the BJP lost in the 2018 election back within its reach. The speculation peaked since his open rebellion against the Congress last week. Mr Pilot has denied any such intention, but the Congress has been skeptical.

The 42-year-old, who was dropped from the posts of the Rajasthan Deputy Chief Minister and the chief of the state Congress, has taken his party to court over its move to disqualify him from the assembly.

He and his team have also remained in BJP-ruled Rajasthan, defying the party’s demand that he move back to Jaipur.

Both Mr Pilot and Mr Scindia — leaders with mass following — had to settle for less than what they expected after Congress won the assembly elections in Rajasthan and Madhya Pradesh in 2018.

Despite making their ambition for the top job clear, they climbed down following personal intervention by Rahul Gandhi. Mr Scindia was made the in-charge western Uttar Pradesh ahead of the Lok Sabha elections.

Mr Pilot was made the Deputy Chief Minister. For the rejuvenation of the party after its decimation by the BJP in 2013, he was also allowed to retain the post of the state party chief – which became a catalyst I the hostilities between him and Chief Minister Ashok Gehlot.

Mr Bishnoi, 51, who is the younger son of former Haryana chief minister Bhajan Lal, had asked the Congress to do everthing to retain Mr Pilot in the party.

“My appeal to the Congress high command is that the way Jyotiraditya Scindia left the party, it caused a big loss to it. Now, we are hearing such rumours about Sachin Pilot. If these are rumours, then there is no problem, but if this is true, then the Congress should do everything to persuade him,” Mr Bishnoi said in a video message posted on his Twitter handle.