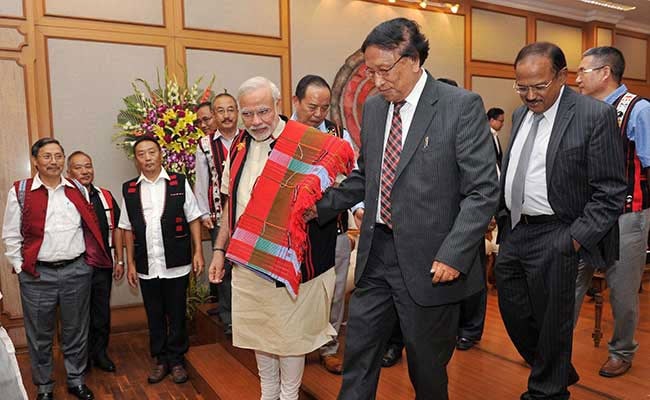 PM Modi with NSCN(IM) General Secretary Thuingaleng Muivah at the signing of Naga peace accord. (File)

Five years after signing the framework agreement on the Naga peace deal with the Central government, the NSCN (IM) rebel group has said there is “trust deficit” indicating the group’s unhappiness with Nagaland Governor and peace interlocutor RN Ravi.

The Naga rebel group NSCN(IM), the main signatory to the framework agreement, has claimed it has been “five long years of waiting” and urged the Central government to uphold what was agreed to in the framework.

The framework agreement was signed on August 3, 2015 between NSCN (IM) and the Centre following negotiations that started in 1997. Though the formal talks for the Final Naga peace deal got over last year, a treaty is still not in sight.

In a press release issued today, the NSCN(IM) raised apprehensions over the negotiation process, questioning Mr Ravi’s recent stance towards the group.

“As seen in the verbal tone of RN Ravi, he has upped the ante against the Naga political groups as he brazenly used slanderous terminology like ‘armed gangs’, ‘underground groups’. What has directly pricked the consciousness of the Naga people is when Mr Ravi went for profiling. He made the state government issue an office memorandum on July 7, 2020, to all the administrative heads of departments seeking information from employees about their relations with Naga underground groups. We put on record that there are no Naga families who are not connected with the Naga political groups in one way or the other,” the NSCN(IM) stated.

Mr Ravi had also written to Chief Minister Neiphu Rio, on June 16, asserting his powers under Article 371A of the Constitution, “proposing” that henceforth “important law and order decisions like the transfer and posting of officials entrusted with maintenance of law and order… of and above the district level will be after the approval of the governor”.

The reason for such a stand was a monthly tax that rebel groups levy on the people in Nagaland.

“This has, therefore, created a huge trust deficit on the Government of India. The way forward with regard to the fate of framework agreement is now faced with deep ambivalence,” it stated.

The NSCN (IM) said that the Government of India must undo the environment of mistrust being built over the time “because it should not take recourse to unethical means to circumvent any conceived obstacles,” NSCN(IM) further added in a press release.