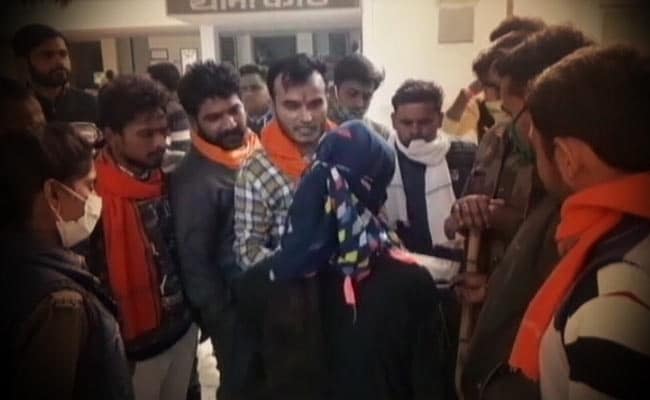 A young pregnant woman, packed off to a government shelter after her husband and his brother were arrested under Uttar Pradesh’s new anti-conversion law, has been hospitalized twice in three days over complaints of stomachache, bleeding and spotting.

The woman was heckled by workers of the Bajrang Dal, a rightwing group linked to the BJP, inside a police station in Moradabad district earlier this week — a video of which had gone viral. The 22-year-old, who had converted to Islam at the time of her wedding in July, had gone to get her marriage registered on December 5 when she, her husband and his brother were intercepted by Bajrang Dal workers and dragged to the police station.

The woman’s husband, a Muslim, and his brother were arrested under new laws that ban “fraudulent and forcible conversions”, including conversion for marriage. The woman told reporters that she married four months before the law came into force, but that did not stop the police. She was sent to a women’s shelter in the district.

The government has denied reports that the woman had a miscarriage at the shelter.

“What was reported in the newspaper is false and it is rejected,” said Vishesh Gupta, the head of the child rights panel in the state. He asserted that the woman had been discharged on Sunday and at the time she was three months pregnant and the baby had a heartbeat.

But NDTV has confirmed that the woman has been hospitalized again within hours. She was first admitted on December 11 (Friday) after she complained of a stomach ache. She was discharged on Sunday, as confirmed by Dr Gupta.

However, she was admitted to hospital again on Sunday, hours after she was discharged, after she complained of spotting, bleeding and abdomen pain.

“The patient’s vitals are ok. Bleeding has also stopped. She hasn’t had bleeding after coming here (to the hospital),” said Sunita Pandey, the Medical Superintendent at the district hospital in Moradabad, while confirming that she was still admitted at the hospital as of Monday afternoon.

In videos that emerged online, the woman and her husband were told by Bajrang Dal members: “It is because of people like you that this (anti-conversion) law had to be enacted.”

The woman’s family has allegedly not been allowed to meet her in hospital.