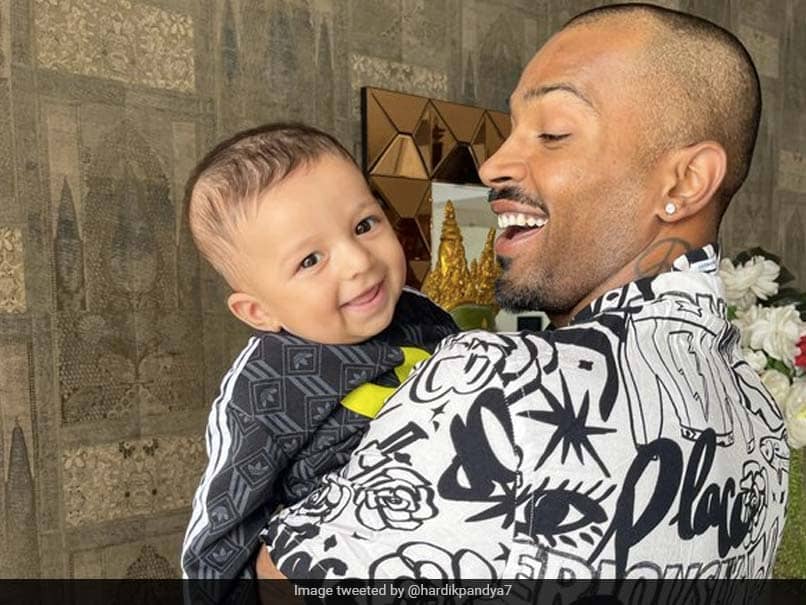 Hardik Pandya was seen holding the small child in his arms with a smile, as the kid merrily beamed away.© Twitter


Team India all-rounder Hardik Pandya was seen laughing with son Agastya in a heartwarming picture, uploaded by the cricketer on social media platform Twitter. Hardik was seen holding the small child in his arms with a smile, as the kid merrily beamed away while facing the camera. “Father and son. Laughing on 5 little monkey rhyme,” read the caption on the tweet from the Indian cricketer. Hardik has been recently spending time with his family, having returned back home after representing Team India in the limited-overs leg of the ongoing away series against Australia.

The 27-year-old represented the visitors in three ODIs and T20Is apiece, making his presence felt. The all-rounder was the highest run-scorer for Team India in the 50-over format, smashing 210 runs in three games at an average of 105.

Hardik further followed it up with impactful performances in the shortest format of international cricket. The cricketer helped Team India register a win in the second game of the series, smashing an unbeaten 42.

Hardik was named as the Man of the Series, marking further success in the shortest format having earlier impressed in the 2020 edition of the Indian Premier League (IPL). The 27-year-old was a vital contributor for Mumbai Indians (MI), who went to lift the trophy.

Team India will be next seen taking on Australia in a four-match Test series. Skipper Virat Kohli will be going back home at the end of the first game, after being granted paternity leave by the Board of Control for Cricket in India (BCCI).